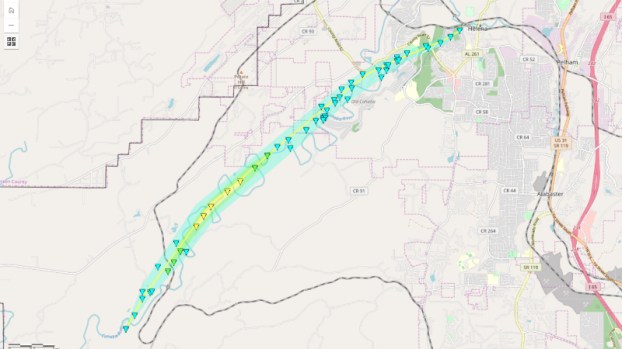 This map shows the path of a tornado that caused damage in Helena on Feb. 6. The blue points show the tornado at EF-0 intensity, then EF-1 at the green points and EF-2 at the yellow points. (CONTRIBUTED/NATIONAL WEATHER SERVICE)

HELENA – Helena residents were spared the full intensity of a tornado that ultimately only caused minor damage and no injuries on Feb. 6.

National Weather Meteorologists have classified the tornado as a EF-2 after surveying damage—the heaviest of which was found in uninhabited areas along the Cahaba River southwest of Helena.

The tornado touched down at 1:57 a.m. in a wooded area near Red Oak Road and Hancock Creek in the Pea Ridge area and tracked northeast, mostly along the course of the river. The tornado quickly intensified to EF-2 strength as it snapped or uprooted thousands of soft and hardwood trees south and east of Shelby County 1 in the Ward Creek area.

Continuing northeast, the tornado crossed many bends along the Cahaba River before eventually weakening to EF-0 strength as it approached the Moss Bend area, where timber damage was also caused.

Further northeast, numerous trees were snapped or uprooted along a portion of Oak View Lane, and then into the Old Cahaba neighborhood, where several homes sustained minor roof, siding and window damage.

The tornado had an estimated maximum wind speed of 120 miles per hour, with a damage path length of 9.9 miles and a maximum path width of 700 yards.

Shelby County Emergency Management Agency Director Hub Harvey said the tornado was not far off from going through heavily populated areas of Alabaster, Helena and Pelham during its peak intensity.

“If that tornado shifts 3 or 4 miles to the east along the same trajectory, it would have been a completely different story,” Harvey told the Shelby County Commission during a report on Monday, Feb. 10.

Harvey used the occasion to stress the importance of the county’s new notification system, which alerts residents of severe weather and other events such as road closures through phone calls, texts and emails.

More than 5,000 people have signed up for the notification system, Harvey said.

Sign up for alerts by visiting ShelbyAL.com/252/Emergency-Management-Agency-EMA and clicking on the red bar.

“A Night of Purpose” event raises thousands for Pelham schools

By NATHAN HOWELL | Special to the Reporter PELHAM – The PCS Foundation hosted its first major fundraiser “A Night of... read more