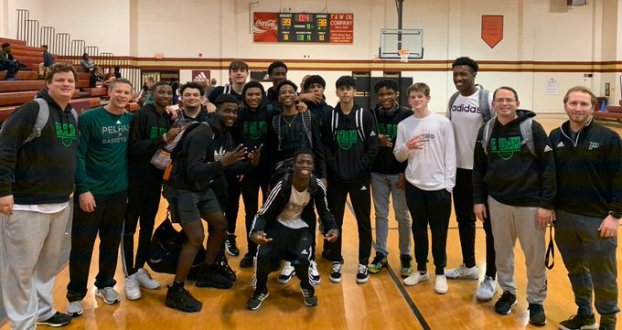 Pelham celebrates after taking down Russell County in the final second to advance to the Sweet 16 for the fourth time in school history. (Contributed/Joel Floyd)

Pelham wins with 0.3 seconds to advance to 4th Sweet 16

SEALE – Standing at the line with 0.3 seconds to play and down by one point, Roy Gonzalez had the weight of Pelham’s entire season on his shoulders.

A team that had upset region-winning Helena a week earlier in the first round of the area tournament with one second left on a tip in from Kendan Maddox to keep its season alive, once again found itself in familiar territory.

All of the injuries during the season and a 12-15 regular season record were out the window. All that mattered were two more shots from Gonzalez to keep Pelham’s season alive or see it come to a sad end.

The sophomore, who has played an important role throughout the season, especially with injuries to others, calmly stepped to the line and sank the all-important first shot to tie the game.

Then, with some of the pressure off his shoulder, he found himself with a chance to win the game and send the Panthers to their fourth final four in school history. Gonzalez didn’t hesitate at all. He grabbed the ball off the pass from the official, took his stance and released a perfectly-rotating ball that hit nothing but the net to lift Pelham to a 39-38 win.

Gonzalez didn’t have his most dominant scoring night of the season, but the young player sank all four of his free throws in the second half ans also hit a 3-pointer in the second quarter.

After winning just one area game during the regular season, those two shots didn’t just signify a win for the Panthers, it signified a coach that never stopped believing in his team and a team that was mature enough to not only believe in their coach, but themselves to comeback from a hole many thought was too deep.

A big reason for that was none other than Xavier Lankford, who after signing to play football at Alabama A&M a day earlier, came out in the fourth quarter and wouldn’t let his team lose.

After the Panthers had given up a 22-17 halftime lead and entered the final quarter trailing 31-27, Lankford put the team on his back on both the offensive and defensive end.

He not only knocked down three baskets and had seven points, but he wouldn’t let the team stop believing. His effort and example helped the entire group step up its game and will themselves to victory despite trailing throughout the quarter until Gonzalez sank his two free throws.

The Panthers scored 12 points in the period, while limiting Russell County to seven points thanks to the new effort, which led to the one-point victory.

In the opening half of the matchup, it looked as if Pelham was well on its way to pulling off an easy upset because of that combined effort on both ends of the floor.

The second quarter was more evenly matched, as Russell County battled back to post 11 points and outscore Pelham by one to make the score 22-17 in favor of the Panthers heading to the half.

That was just the beginning of the momentum shift in favor of the Warriors, who used the halftime break to talk about what worked well in the second quarter.

They carried that into the second half and put together a third quarter that looked like it would be the difference in the outcome.

Pelham could only knock down one field goal, but did hit three of four free throws to at least stay within striking distance after Russell County scored 14 points to take a 31-27 lead into the final period.

That’s when Lankford, who gave up basketball last year to focus on football, came out determined to keep his comeback season alive. He came back because he missed his teammates and the game, and he didn’t want to let them down in such a tight game.

He came up big in the final quarter, as did Kendan Maddox and Gonzalez to help Pelham post 12 points to pull off the incredible comeback.

Pelham only had five players score in the game, but that was enough. Lankford led the way with 11, while Floyd added 10. In addition to that, Maddox had eight and Gonzalez posted seven, while Austin Hill added a 3-pointer.

The Panthers will now play Sidney Lanier or Dothan in the Sweet 16 in Montgomery on Friday, Feb. 14.

“A Night of Purpose” event raises thousands for Pelham schools

By NATHAN HOWELL | Special to the Reporter PELHAM – The PCS Foundation hosted its first major fundraiser “A Night of... read more