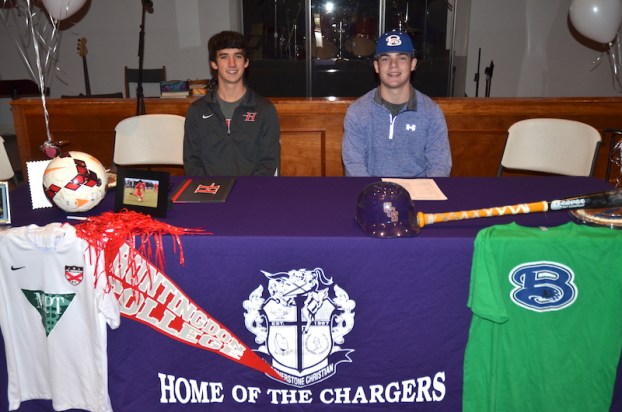 “We’re very proud of both of them, and know they will do very well at the next level,” CCS Athletic Director James Lee said.

Bailey’s father, Shane Bailey, said he and his wife, Lisa, are excited to see what the future holds for their son.

“He has worked very hard for years following his dream, and this is the next step,” Shane Bailey said.

Jace Bailey said he is excited for this new chapter.

“I’m looking forward to the next four years at Huntingdon playing for coach Matt Cooper,” he said.

Collins’s parents, Keith and India Collins, said their son also has aspired to play at the next level, a goal in the making since he was about 3 years old.

“That’s been his dream,” his mother said. “He was worried and excited, but it all worked out. It was a blessing.”

In addition to their other sports, Jace Bailey and Mason Collins were both kickers on the CCS football team.

“I want to thank everyone who helped me get to this point,” Collins said. “I’m excited for the next two years, and to see what happens after that.”

By ALEC ETHEREDGE | Managing Editor  MONTEVALLO – Unresponsive and lying on the gym floor with his mom screaming from... read more