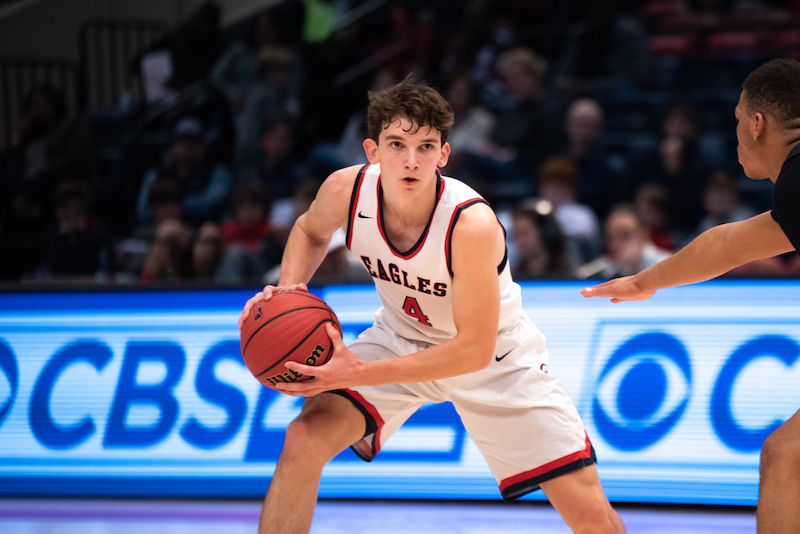 Oak Mountain’s Wilder Evers had a strong game to help lead the Eagles to a 60-36 win over Huntsville and a spot in the Elite Eight. (Reporter photo/Keith McCoy)

JACKSONVILLE – The Oak Mountain Eagles have looked like an elite team at times this season, and on Thursday, Feb. 13, the Eagles proved that title correct by advancing to their first Elite Eight in four years with a dominant 60-36 victory over Huntsville.

While the offense was special in the win, shooting 20-for-31 from the field, the defense won the day for the Eagles by allowing Huntsville to make just 13 of its 65 shots in the game for a percentage of 20.

That kept the Panthers from scoring more than 12 points in any period, while the Eagles scored at least 15 in three of the four periods to pull away.

Zane Nelson continued his impressive season by posting 20 points and five rebounds thanks to making seven of his nine field goals and two of his three 3-pointers. Wilder Evers also had a solid day, including a great first half, finishing with 14 points on 5-of-7 shooting from the field and 2-of-3 shooting from beyond the arc.

All of those players contributed in Oak Mountain jumping out to a 13-0 lead in the first 2:25 of the game. A big reason for that early run was back-to-back 3-pointers from Wilder Evers, as the Eagles went on to take a 15-5 lead at the end of the first quarter.

That built the Eagles’ confidence heading into the second quarter, as they started on an 8-2 run to jump up by 18 points at 25-7. From there, the Eagles never let up and took a 33-15 lead into the break.

Despite Oak Mountain’s dominance, Huntsville had the half to make adjustments, while the Eagles had to deal with the pressure of closing out a pressure-packed playoff game.

The Panthers took advantage and came out to cut the deficit to 10 points with a 12-4 run that made the score 37-27.

But the uphill battle proved to be too steep, as Oak Mountain eventually found its rhythm again.

Following two free throws from Smith to end the third, Oak Mountain took a 12-point lead into the final quarter, and then squashed any chance Huntsville had with a 7-0 run in the first three minutes of the fourth to go back up by 19 points.

From there, the Eagles left no doubt en route to the 24-point win.

Instead of playing Hoover for the fourth time this season, Oak Mountain will now take on Sparkman, who beat the Bucs in the Sweet 16, in the Elite Eight.