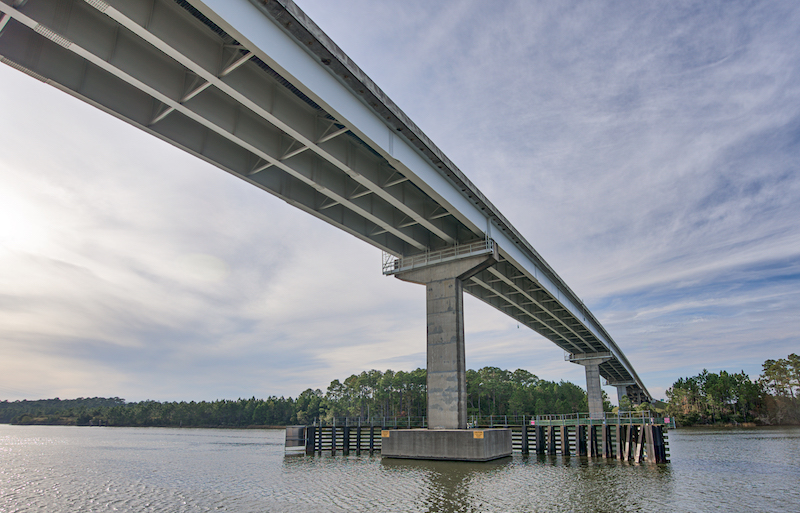 The proposed Coosa River Express project would involve the construction of a toll bridge over Lay Lake on the Coosa River system. (Contributed/Tim James Inc.)

COLUMBIANA – Private developer Tim James Sr. led a presentation on Feb. 13 detailing his company’s proposed project to build a toll bridge over Lay Lake on the Coosa River system, pending approval from Shelby County and obtainment of all required permits.

James, owner and president of Tim James Inc., and members of his business team detailed plans for the proposed Coosa River Express, a 1,600-foot-long toll bridge that would connect Shelby and Talladega counties, at Shelby County 28 at Perkins Landing on the Shelby County side of the river.

“The Coosa River Express is a project that I looked at many years ago when we were developing the Foley Beach Express in Baldwin County,” James said. “Over the years, the timing wasn’t right, but now it is.”

According to James, the Coosa River Express would be a privately funded project involving the construction of the bridge, four to five miles of new roadways and improvements to existing roadways. The project would also entail the construction of a roundabout where East College Street meets Shelby County 28 and Old Highway 25 near Shelby County High School in Columbiana.

This illustration shows the roundabout that, if the proposed Coosa River Express project is given the green light, would be constructed where East College Street meets Shelby County 28 and Old Highway 25 in Columbiana. (Contributed)

The total estimated cost of the Coosa River Express project is between $30 million and $40 million.

The proposed project has elicited positive and negative feedback from residents.

“We’re not selling out, and we’re not moving,” Lee Bryant said. “If a bridge is coming, we would rather it be a private toll bridge because it will force traffic to slow down.”

Lee said their family has owned property in that area near the water for six generations.

“My brother and I are in preserve-and-protect mode,” Doug Bryant said, and added James Sr. has sent him all of the information he has asked for regarding the project. “He has been very respectful of everyone in the neighborhood.”

But the proposed bridge has also raised concerns for lake residents like George Kenderdine, who spoke at a recent City Council meeting about the bridge possibly lowering property values and bringing traffic noise and litter to the area.

According to Perkins Landing resident Aubri McClendon, the results of a petition shared electronically and door-to-door revealed a majority of the subdivision’s residents are opposed to the proposed bridge.

James Sr. said he acknowledges these and other opinions residents have regarding the project.

“They have a right to that opinion just as strong as a businessman or woman in Columbiana that says we do want some growth,” he said. “I believe every citizen in Shelby County, once they digest this, (is) going to be for it, for the most part. You’re always going to have some folks who disagree, and they have a right to disagree.”

For places like Columbiana, James Jr. said, the proposed route improvements would bring more people through the area, where they could spend money at local businesses.

Documents provided by the developer – available online at ShelbyAL.com/DocumentCenter/Index/318 – include route illustrations, traffic projections and travel time estimates with the bridge versus without the bridge.

“Twenty-five to 30-minute round-trip time savings is a big deal,” James Jr. said. “It’s more than that, too, if you’re trying to go east.”

Tim James Inc. has entered into a contract with Auburn University to do a full economic impact study on the project.

A public involvement meeting about the project will be held on Tuesday, Feb. 18, from 5-8 p.m. at the Shelby County Arts Center’s Grande Hall multi-purpose venue in Columbiana.

Attendees will have an opportunity to submit public comment forms at the meeting.

Comments also can be sent through the online comments form at ProposedTollBridge.shelbyal.com.

What will the legislative session hold for Hoover City…