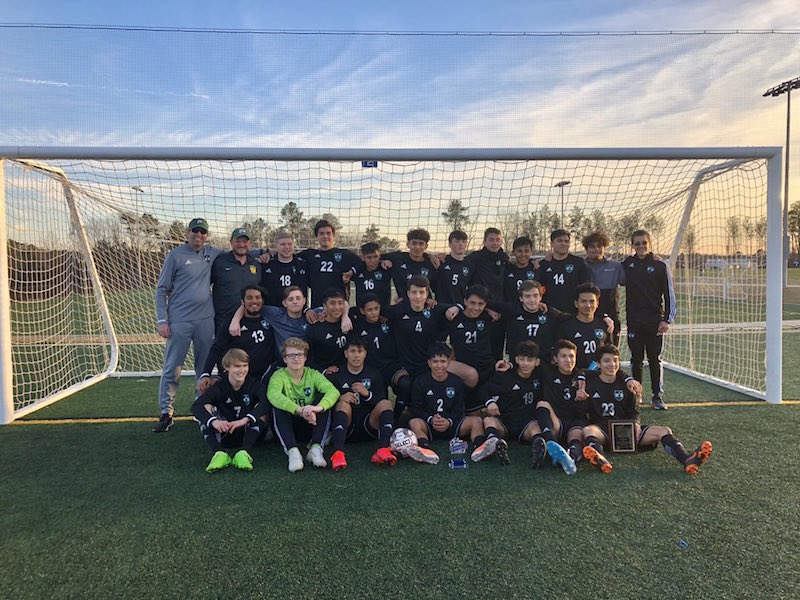 The Pelham Panthers won the Gold Division of the 2020 Lakeshore Shootout after taking down Chelsea in PKs. (Contributed)

NORTH SHELBY – We got an early edition of the Pelham-Chelsea rivalry on Saturday, Feb. 15, when the two met in the championship of the Lakeshore Shootout Gold Division.

The last time these two teams met was Tuesday, April 30, when the Panthers won a playoff game off a game-winner from Eber Serrano in the final minute of overtime to send them to the quarterfinals of the playoffs and end Chelsea’s season. That came after the Hornets had won two regular-season games by one goal.

Now, for the fourth consecutive matchup, the two teams struggled to create in separation—this time for an early season championship. And yet again, just like last year’s playoff matchup, the two were scoreless through regulation, which led to a penalty-kick shootout.

In PKs, the two teams each hit their first shot. But in round two, the Hornets missed and Pelham hit despite Chelsea keeper Joseph Gage getting a hand on the ball.

That gave the Panthers a 2-1 lead. In round three, Pelham keeper Braden Troxwell stepped up again with another big save to extend Pelham’s advantage.

It looked as if Chelsea had answered with a big save, but it was ruled that Gage moved early, which gave Pelham another shot, and this time, the Panthers capitalized to take a 3-1 lead.

The Hornets hit on their next shot, but Pelham stepped back up with a chance to win on its next attempt. The Panthers took advantage and buried the final shot to take the 4-2 PK win.

For Pelham, it continued a strong 5-1-1 start to the 2020 season that has featured a 1-0 win over Carver Birmingham, a 10-0 win over Gardendale and a 3-0 loss to Spain Park outside of the Lakeshore tournament. In the Lakeshore tourney, Pelham beat Cullman, Daphne and tied with Stanhope Elmore in addition to beating the Hornets.

Chelsea’s early success has featured a 3-0 win over Springville, a 2-1 win over Oneonta and a 3-2 win over Pinson Valley outside of the tournament. In the Lakeshore Shootout, the Hornets beat Cullman and tied with both Albertville and Stanhope Elmore in addition to the game against Pelham.