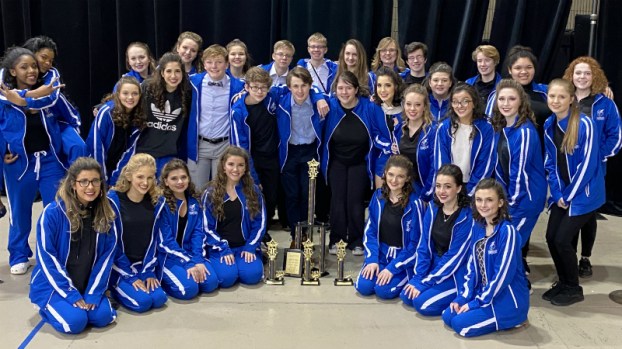 CHELSEA – Though it has been in existence a relatively short time, Chelsea High School’s Out of the Blue Show Choir has put together a long list of accomplishments.

Most recently, Out of the Blue swept top honors in the Small Mixed Division at the Capital City Classic in Montgomery on Jan. 25 and also took first in its division at the Diamond Classic in Albertville on Feb. 8.

“They love each other, and they love the arts,” Dick said. “They love what they do. They are outstanding young people.”

The choir placed Overall Fourth Runner Up in finals at the 2018 Heart of America Nashville event, and last season, the choir was nominated for the national FAME Most Promising New Program Aspire Award.

The group is comprised of 23 singers/dancers in ninth through 12th grade, a band of nine and a crew of five, and is under the direction of Dick, with choreography and show design by Dallas Pritt, artistic assistance from Audra Chaffin and musical arrangements by Brock Keiper and Nick Brockamp.

Dick started the show choir, which for its first two years did not compete.

“It started with an idea: Some parents and kids came to me and said we’d really like to do this,” Dick said. “After the first couple of years going to festivals and performing, we said this could really be something.”

Dick at the time had a master’s degree in music education but no show choir training—other than a child who had participated in the show choir at Spain Park High School.

“Nobody teaches you this stuff in school,” she said. “All I had at the beginning was a willingness to learn. No budget. No help. We did it, and it’s been really successful.”

She hired Pritt, a professional actor/choreographer/performer who lives in Nashville, to help get the program off the ground. Pritt specializes in developing small, unknown groups, and he excelled in that role for Chelsea High School’s choir, and is still involved.

“He and I are just a really good team,” Dick said. “He works so well with the kids, and we work so well together.”

Dick is an advocate for show choir because it combines arts and performance with athleticism, along with incorporating teamwork and facilitating many important lessons for students.

“It’s like a sports team,” said Dick, a former athlete and basketball coach. “That’s how I run it, and that’s how a lot of people run it.”

Out of the Blue begins practice each July with camps, and then rehearsals are held each Tuesday during the school year leading up to the competition season in January and February.

Show choir participants are involved with many other extracurricular activities, Dick said, including sports, band, theatre and cheerleading—bringing together students who might not otherwise have much in common.

“It’s unity through music and the arts,” Dick said.

Out of the Blue has one competition left this season, on Feb. 22 at the Jasper Foothills Classic.

For more information about Out of the Blue, visit ChelseaHighSchoolChoir.com

FROM STAFF REPORTS HOOVER – To see Jason Zajac today, it would be hard to imagine him struggling to jog... read more