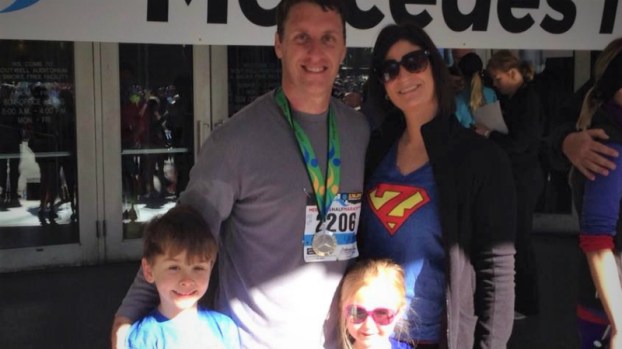 HOOVER – To see Jason Zajac today, it would be hard to imagine him struggling to jog a mile on a treadmill, let alone run 26.2 of them.

But that was the case seven years ago, when he was more than 60 pounds heavier, for this Riverchase Career Connection Center Health Science Academy instructor, Fire Science Academy Lead teacher and athletic trainer for Spain Park High School.

Not sure where he finds the time, but, as the mileage above alludes to, he runs in marathons too.

On April 26 he will run in the Virgin Money London Marathon, one of the “big six” marathons across the world, while raising money for OAR: Organization for Autism Research. Much more on his pending visit “Across the Pond,” where he will join 40,000 like-minded people all running the streets of London, but first let’s look much closer at how he got to this point.

“I grew up athletic in Syracuse, New York,” Zajac said. “I was always physically active, playing football, baseball (his main sport) and golf in high school.

“My running was for conditioning or as a punishment; it didn’t appeal to me then.”

Life progressed and he moved to Birmingham in 2001 to escape the harsh New York winters and take a job as an athletic trainer with Dr. James Andrews and Healthsouth.

“I loved being on the sidelines Friday nights at a high school football game; I still do. I still get a rush of adrenaline from it.”

However, his closeness to athletes did not rub off on his own conditioning as life evolved and he started a family (his son is now 13 and his daughter, 10, and both attend Hoover City Schools).

“I knew I was unhealthy, unhappy and overweight. My dad died of a heart attack when he was 56 and my grandfather also lived an unhealthy life. I looked in the mirror and knew I had to do something. My children were young and I wanted to be there for them and watch them grow up.”

Small steps would prove to be key.

“My target was to jog a mile on the treadmill. I couldn’t do it without taking walk breaks. It was miserable, but I didn’t give up and I eventually got there.”

That winter, seven years ago, he set himself a challenge to keep moving. The treadmill in Spain Park High School’s athletics department became his home away from home and he became more confident as he picked up the pace and could run/jog a mile, then run a mile and his improvement drove him on.

He felt ready to enter a 5K, held at Veterans Park near Spain Park on a course he knew well.

“I did it and survived, is about all you can say, but I really enjoyed the post-race celebration, camaraderie and sense of accomplishment. I was hooked.”

5K became a half marathon, which in time would become a full marathon, but not without significant challenges at each stage.

He ran the Mercedes Half Marathon in 2014, but called it a “miserable experience and swore off doing it again.”

But that was only temporary. A few years later, as he was going to be 40 in 2018, he decided he wanted a true challenge ahead of him. He decided to go all in and started training for a full marathon.

He trained methodically and ran the 2018 Mercedes, with a target of breaking four hours. That didn’t happen, but he was proud to finish in 4:27. He had the support of his wife and children, cheering him on at the finish line.

Breaking four hours continued to be elusive as he ran another Birmingham marathon and the Rocket City marathon in Huntsville.

Again he said he was done with marathons, but, as fate would have it, he got a spot in the 2019 Chicago Marathon through the lottery system. He got the news in January last year, with the marathon in October.

“I never figured I’d get in, but it came at the right time. I knuckled down and trained with great focus month after month. I knew I was much stronger and the day couldn’t have gone any better. At mile 24 I had a hamstring cramp, but fed off the crowd support and was beyond ecstatic to run in 3:44:31.”

Smashing his four-hour goal, he has now set his sights on eventually running all six of the major world marathons: Chicago, London, Tokyo, Berlin, New York, and the granddaddy of them all, Boston.

“I want to run the streets of these wonderful cities.”

You get in these in one of three ways: time qualification, lottery selection and charitable giving. Time is still some way off for him and not all offer a lottery, so charitable giving is his best shot.

That’s how he ended up in London, as a runner for the OAR team.

“I have co-workers who have children with autism. This is such a huge topic and I see the impact that research, early intervention and inclusion are having on teachers and families. When OAR selected me, I knew it was a great fit, as I’m running for something I’m passionate about helping.”

His goal is to raise $5,000 and he’s already over halfway there. The Student Government Association at Spain Park High School has gotten behind him, as have fellow educators.

“It’s much more than just a personal goal for me (to run this marathon); I’m running it for others. That’s very impactful for me.”

Zajac has also been accepted into the New York City Marathon in November 2020.  He will be running to raise money for Kulturecity (Kulturecity.org), specifically for their Sensory Program that provides education and creates sensory inclusive locations.

He would have the same $5,000 charitable commitment as with OAR, and would be then, assuming all goes well with both marathons, halfway to his stated goal of running the big six world marathons.

“I want to still be running when I’m 85. I’m in it for the rest of my life and am so thankful to everyone I have shared miles with and who continue to keep me accountable.”

FROM STAFF REPORTS To help maintain its status as one of the best quality-for-cost higher education institutions in the state,... read more