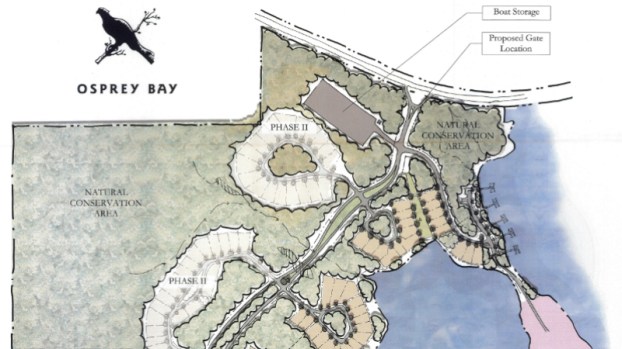 The Osprey Bay development would comprise 123 lots with cabin-style modular homes on 174.6 acres of property on Lay Lake. (CONTRIBUTED)

COLUMBIANA – The master plan for what would be a unique development near Lacoosa Marina on Lay Lake was approved by the Shelby County Planning Commission on Monday, Feb. 17. 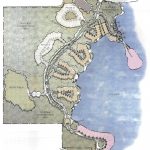 The Osprey Bay development on property owned by Alabama Power would comprise 123 lots in two phases, with cabin-style modular homes built to preserve the beauty of the area.

In fact, the master plan for the 174.6 acres of the property is the first request submitted to the Planning Commission for a conservation subdivision, which is an option allowed by Shelby County Subdivision Regulations to provide incentives “for the preservation of key natural resources through development patterns that preserve and enhance rural character,” according to the report prepared by county staff for the Planning Commission.

The property is between Shelby County 71 and Shelby County 400, in the area of Lacoosa Marina and the publicly-used Narrows Boat Launch.

Four residents of the area voiced concerns about the development to the Planning Commission, including the shallow water in the area being prohibitive to boats, increased traffic on a road they already consider dangerous, the impact on timber and wildlife in the area and the effect of the septic system on nearby drinking and recreational water.

“My biggest thing is how is that going to be handled without getting into the waterway,” Kevin Jones said and added that the residents do not want the development so close to their property. “We’ve had peace and quiet all these years.”

Residents who attended the meeting were told that their concerns could be addressed during the development of the preliminary plats, and that they would also be notified prior to the Planning Commission’s decision.

Jason Dunham of Nequette Architecture & Design and Bill Wilson of Gonzales, Strength & Associates addressed the Planning Commission and the residents at the meeting.

The master plan identifies eight residential clusters, ranging from 2-7.5 acres and including nine to 20 lots.

The residences would be accessed via a main “rural parkway,” with a gated entrance off Shelby County 71, and then “rural drives” serving each cluster. The roads would all be paved.

“The idea is it preserves true open space,” Dunham said. “It is intended to promote a sense of community in this rural development.”

The overall density for the development is 0.7 dwellings per acre.

Of the total 174.6 acres of property, 43 acres would be disturbed for development.

Osprey Bay would be marketed toward people wanting a second home on the lake, though the properties could be used as year-round residences, especially the larger “estate” sites.

“These homes are more weekend getaways and not permanent residences,” Wilson said.

The homes are proposed to be prefabricated cottage-style cabins made to feel like they are nestled on the lake, similar to a campground.