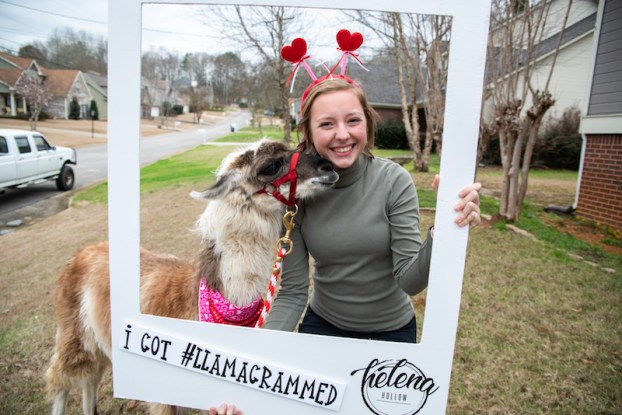 Peyton Owens of Helena was gifted a Llamagram by her loved one on Valentine's Day courtesy of Helena Hollow. (Reporter photo/Keith McCoy)

HELENA – Most people expect to receive candy and flowers on Valentines Day, this year Helena Hollow Farm helped people bring something a little more exciting to loved ones with Llamagrams.

For the fee of $50 the farm brought a live llama as a gift to the front door for several resident’s unsuspecting Valentines. According to Jamie Griffin, Helena Hollow owner, the Llamagrams were a big success.

“My wife and one of my friends came up with the idea. I didn’t even know we were doing it until we already had some spots sold,” said Griffin.  “But it’s been a lot of fun. We’ve been all over the Birmingham area.”

The gift proved to be an unconventional but welcome surprise to the recipients.

“I’m speechless with excitement. This is so much fun and was such a great gift,” said Peyton Owens.

The llama that met with several residents is named Tucker, according to Amy Griffin from Helena Hollow.

“He’s a year old. We bottle raised him so he is very people friendly and loves attention,” she explained. “Tucker the llama is still young and fairly small, his head stands just under 5 feet, so we didn’t use a trailer to haul him to his Llamagrams. He just rode in the backseat of our truck and hopped out like a dog would at each destination!”

Tucker surprised nearly 20 different people between the two days that the service was offered.

According to Griffin, Helena Hollow is considering extending Llamagrams as a year round service for birthdays, anniversaries and other special events.

Helena Hollow is offering many other creative services and events throughout the year like  the “VIB (Very Important Bunny) Party to celebrate Easter,” on March 28th.

For info on future Helena Hollow events like these visit Helenahollow.org

Precinct 10 voters will vote at temporary structure in 2020

NORTH SHELBY – While U.S. 280 area residents might be looking forward to the conveniences offered by a new Shelby... read more