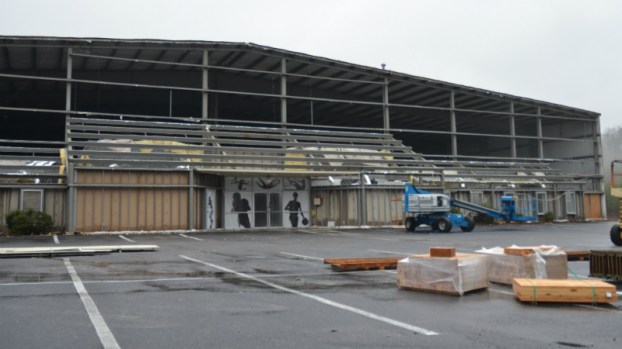 Demolition of the building that formerly housed Blackwatch Sports Performance has begun. A new Shelby County services center will be constructed at the site. (REPORTER PHOTO/STEPHEN DAWKINS)

NORTH SHELBY – A new Shelby County facility off U.S. 280 will feature a third driver license test site in the county, a new home for the county’s 911 organization and other conveniences for people in the fastest growing part of the county.

The facility’s 4,700 square feet will be split among three levels. The new building will take up on a portion of the footprint of the former building that most recently housed Blackwatch Sports Performance.

The remainder of the space at the site will be used for parking, which will also benefit the adjacent SportsBlast 1996 soccer fields.

Demolition of the Blackwatch building has begun. Bids are expected in March for the construction project, and the new facility should be complete in 12 to 14 months, Shelby County Manager Chad Scroggins said.

On the bottom level will be new offices for the Shelby County Water Services, which was formerly located in Westover.

Also, the Shelby County License Office formerly located in Inverness Corners will be relocated to the new center.

Both those offices formerly operated out of leased space. The current leases will be up in 2021, Scroggins said, so officials planned construction of the new center to avoid renewal of the leases.

The License Office will adopt a couple of new approaches in the spirit of added convenience. First, the office will use a queue system. Instead of standing in a long line, visitors will be given a number by a concierge and then can take a seat until their number is called.

The office will also offer a drive-thru window for simple transactions like motor vehicle tag renewals.

A new addition to the U.S. 280 corridor in Shelby County will be the driver license test office. The county currently has two such offices: in Columbiana and Pelham.

Scroggins said the new center will offer many conveniences for residents in the U.S. 280 area, which is the fastest growing part of Shelby County.

“It puts the services in the north end of the county where folks can conveniently go there instead of driving across the county like they previously have,” Scroggins said.

In fact, the new services center will include uncommitted space that can be used to accommodate future needs.

A large multipurpose room will be located on the first floor. This will house polls during elections but can serve various other purposes, including large meetings.

A point of contact for a new Shelby County Sheriff’s Office substation will also be located on the bottom floor of the facility.

The second floor, which is dedicated to the Sheriff’s Office and Shelby County 911, will be a secured space, both with restricted access but also with building materials able to withstand strong storms to keep the county’s critical services operational in the event of a natural disaster.

The 911 center will move from its current home at the county facility in Pelham.

The third floor will provide a new home for Central Alabama Wellness, meeting space for economic development entity 58 INC. and room for future growth as additional needs are determined.

Shelby County purchased the property that will serve as the site for the new center several years ago when it entered foreclosure. Discussions began in 2018 or 2019 about the need for a new services center, Scroggins said, and frugal financial management allowed the county to budget the full amount expected for construction—about $12 million—without borrowing money for the project.