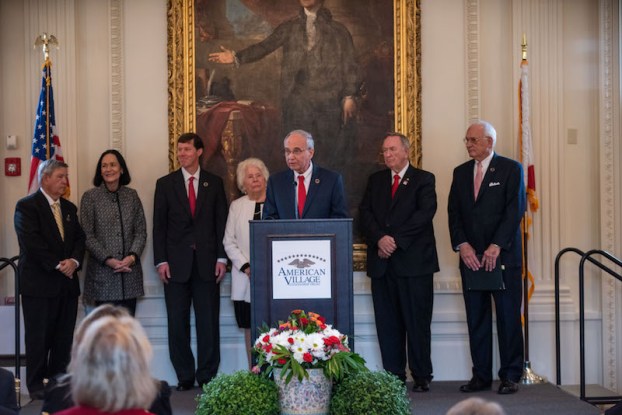 MONTEVALLO – The 188-acre campus of the American Village teemed with activity on Monday, Feb. 17, as staff members, stakeholders and county residents celebrated the 20th anniversary of the venue’s inception.

Since its gates first opened in November 1999, the American Village has hosted more than 750,000 students in pre-kindergarten through 12th grades for educational programs designed to engage them in interactive learning experiences relative to America’s journey to independence.

In addition, the venue’s public programs on Memorial Day, Independence Day and Veterans Day—and the American Village Festival of Tulips created in 2016—have drawn thousands of adult and youth visitors alike to the grounds each year.

“I want to acknowledge God’s providential care,” American Village Founder and CEO Tom Walker said in his remarks at a convocation on Feb. 17. “In the years leading up to the opening and in the years since, the right people have been in the right place doing the right things at the right time.”

Walker recounted sketching his initial idea for what would become the American Village on a napkin before collaborating with architect Mike Hamrick on the overall vision for the campus and each of its buildings.

When the American Village opened in 1999, only four buildings existed: Washington Hall, inspired by George Washington’s Mount Vernon; the Courthouse, modeled after Colonial Williamsburg’s Courthouse of 1770; Founders Hall, which served as the first administrative building for the venue’s staff; and the original barn, which remained from the period when the land was a working cattle farm.

Now, the campus features more than 20 buildings, including replicas of the president’s Oval Office and the East Room of the White House; a colonial chapel reminiscent of Bruton Parish Church of Williamsburg; Concord Bridge, which spans a one-and-a-half-acre lake; and the National Veterans Shrine, patterned after Philadelphia’s Carpenters Hall. 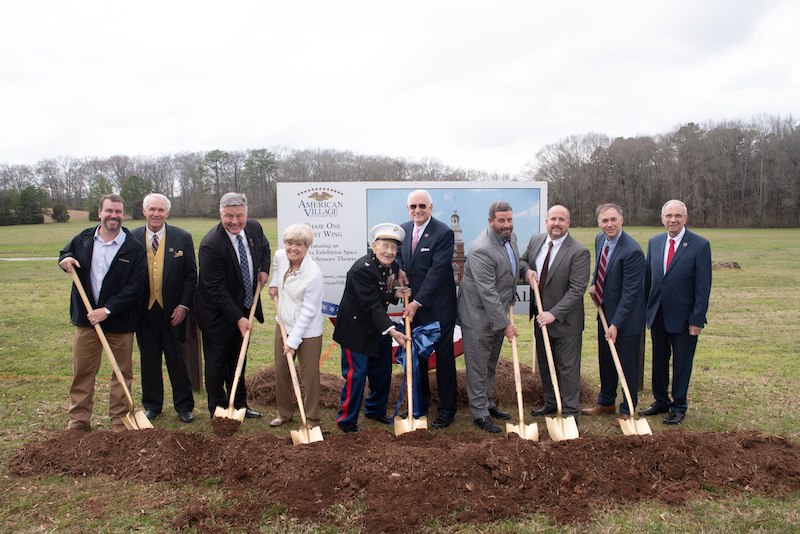 The anniversary events on Feb. 17 included a groundbreaking ceremony for the Independence Hall, which is a part of the American Village’s Liberty 250 Campaign. (Reporter Photo/Keith McCoy)

Walker said his primary goal for the American Village is to give students a place to learn the country’s history and system of self-government through active engagement, whether they drill in Washington’s Continental Army or meet patriots of the past, such as Phillis Wheatley and Patrick Henry.

According to Walker, such experiences are needed to address what he calls “historical and civic illiteracy” among students.

Dr. Jack Hawkins Jr., chancellor of Troy University and chairman of the American Village Board of Trustees, also spoke about the importance of educating future generations about America’s history.

“This institution we know as the American Village was called into existence by a shared belief that we were losing indeed a vital part of American education; namely, the remarkable circumstances that led to the revolutionary stand for liberty and to the 1776 Declaration of Independence and with it an extraordinary declaration of principles that became renowned as the expression of the American mind,” Hawkins said.

Hawkins, Walker and several former board chairs presented the Liberty Legacy Award to outgoing Shelby County Manager Alex Dudchock for his 30 years of service to the county.

“Alex Dudchock has brought a driving determination to help this entire county, the American Village included,” Walker said. “I cannot begin to count the ways he has been at the forefront of our efforts, not only to be a Shelby County institution, but also a regional and national one for history and civic education.”

Dudchock thanked the members of the Shelby County Commission, county management personnel and many others who have been involved in efforts to move the area forward.

“It is about the power of the people, the people making a difference when they’re not being recognized,” Dudchock said. “That’s what it’s all about.”

To learn more about the Liberty 250 Campaign, email Liberty250@AmericanVillage.org.