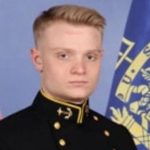 “The American Village is pleased to join the Shelby County Reporter in recognizing Ensign Joshua Kaleb Watson as Veteran of the Week,” American Village founder and CEO Tom Walker said. “He is representative of the hundreds of thousands of Alabamians who have risked it all for the sake of our country and its freedom. To all veterans we owe a debt we can never fully repay.”

Ensign Joshua Kaleb Watson gave his life for his country and served with honor in the United States Navy. Joshua was born in Enterprise, Alabama, in 1996. He was a 2004 graduate of Enterprise High School, where he was a member of the National Honor Society and the French Honor Society. Watson was a 2019 graduate of the U.S. Naval Academy at Annapolis, and was on the Commandant’s and Dean’s Lists. He was stationed at the Pensacola Naval Air Station where he was the duty officer on Dec. 6, 2019, when a terrorist attack killed three sailors including Watson. Though fatally wounded, Watson managed to exit the building and give vital information to the First Response Team that ended the attack. His commanding officer later said, “…when confronted they ran toward it and saved lives. If not for their actions this incident could have been far worse.”