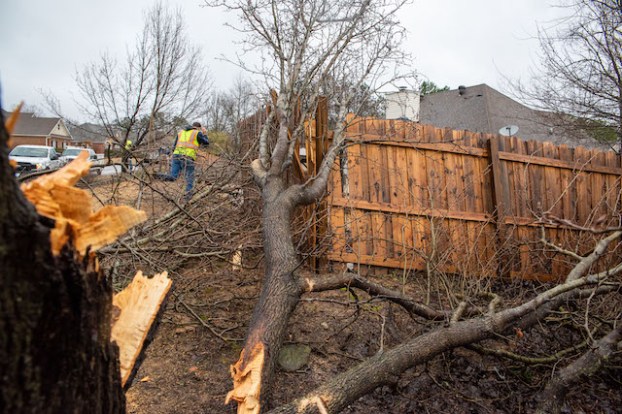 A tornado on Thursday, Feb. 6, caused just minor damage in Helena, but is something that has made many be more weather aware after a close call. (Reporter photo/Keith McCoy)

COLUMN: Are you weather aware?

For those of us that have lived in Alabama for more than a day, we know that it’s likely we will experience all four seasons within a week. That has never been more evident than in the last week.

The state has experienced unusual weather for February, and not in the form of a winter wonderland. Instead, what is normally one of the coldest months of the year has featured flash flooding, temperatures in the 70s and a tornado.

But to hold true to the state, there was a morning of snow showers thrown in on the morning of Thursday, Feb. 6.

All that brings to light the safety of how quickly weather can go from stable to unstable in the state of Alabama, and right now, many residents, specifically in Helena, are lucky to be alive.

During the early-morning hours on Feb. 6, a tornado quickly formed on the far west side of Shelby County in a wooded area near Helena. Shortly after touching down at 1:57 a.m., the tornado was considered to be an EF-2 tornado that would have been potentially devastating over a heavily populated area.

Fortunately, the tornado dissipated to an EF-0 tornado a few miles later when it approached populated areas like Oak View Lane and the Old Cahaba neighborhood in Helena.

Only minor damage to roofs and windows as well as downed trees was reported, but it made many stop and think about not only how fortunate they were, but their weather safety plan.

In the middle of the night families were tucked away in bed with no sign of severe weather, and then all of a sudden it was in their backyard.

At that point, it’s a scramble to get out of bed, get the proper clothing and shoes on and get to a safe place. But with the storm starting just down the road, many didn’t have time to prepare.

Our local meteorologist tell us every day to have a weather radio, be signed up for alerts and have a plan in place, but many of us don’t consider what to do until the situation arrives.

Fortunately, this time, lives and major damage were spared, but what happens when the tornado decides to touchdown in a heavily populated area or sustains its strength for a long duration of time?

That’s something we should all be prepared for. A plan in place could save you and your family’s life.

FROM STAFF REPORTS / Editorial Often, we find schools don’t have funds to help different programs flourish, and that can... read more