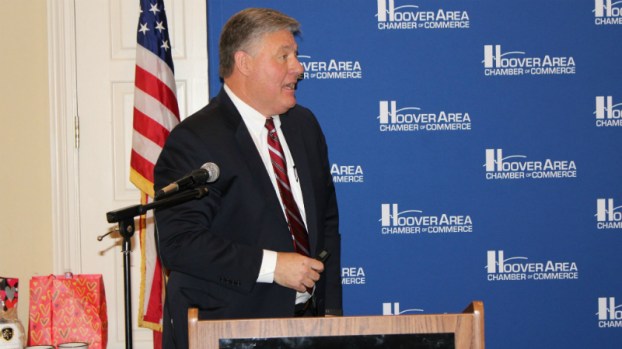 HOOVER – Retiring Shelby County Manager Alex Dudchock has accomplished much in his more than 20 years with the county, but his presentation to the Hoover Area Chamber of Commerce on Thursday, Feb. 20, focused on recent and upcoming projects.

Some of those projects include:

“The first thing we know in Shelby County is it’s about our people,” Dudchock said. “We cannot do anything without our talented folks.”

Dudchock noted that McLeod employed 357 people when it opened but has already grown to 448 employees.

Also, the county studied the return on an initial investment in the National Computer Forensics Institute and found that it more than doubled just in lodging tax receipts by the county.

Shelby County’s unemployment rate is historically low at under 2 percent, Dudchock said but noted that officials must continue working to train the people who are still unemployed.

Growth has also occurred at the Shelby County Airport. Dudchock said the airport housed 67 planes in 2008 and 144 planes in 2019.

Decisions about where to locate businesses are made in part because of the services and quality of life that are affected by local governments.

Shelby County had a participation rate of 80 percent in 2010, which was among the best in the nation, but officials this year have set a goal of 90-percent participation.

The luncheon was sponsored by the Birmingham Barons. Premium Services and Group Sales Manager Abby Southerland noted that opening day for the team is less than 50 days away, on April 9.

FROM STAFF REPORTS Several members of the University of Montevallo Student Government Association received firsthand advice from a member of... read more