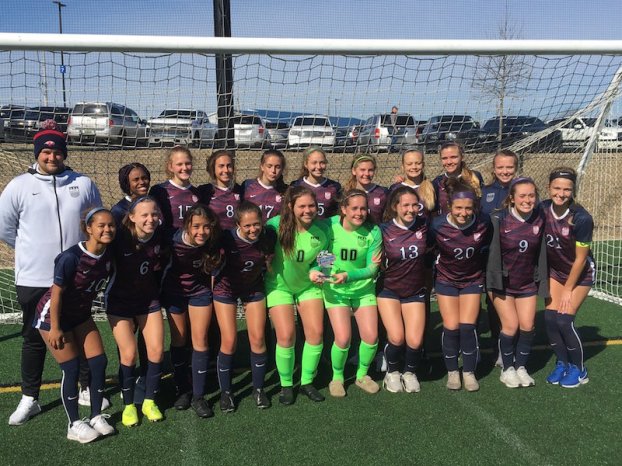 The Oak Mountain girls soccer team was already off to a soaring start to the 2020 soccer season, but on Saturday, Feb. 22, the Eagles reached new heights by completing a perfect showing at the Lakeshore Shootout to claim the championship trophy in the Platinum division.

Not only did the Eagles claim the title with a perfect 4-0 record, but were the only team to win more than one game after taking down every team in their division by scoring 12 goals and giving up just one.

Oak Mountain got the event started on Friday, Feb. 21, with a win over Northgate (Ga.) High School. The Eagles showed in that matchup what a dominant weekend it was going to be for the team defensively thanks to a shutout, while their offense also started strong with four goals, which became their most of any matchup throughout the weekend.

After that opening win, Oak Mountain moved on to a matchup with James Clemens later Friday night, and was close to being just as dominant. The Eagles put up three more goals offensively and picked up a second shutout in a row to improve to 2-0 in the tournament.

That built up their confidence heading into a matchup with always strong county foe Chelsea at 8 a.m. the next morning.

The Hornets went on to put up the best fight of any team against the Eagles, but it still wasn’t enough to take down a strong Oak Mountain team that still played lights out on both sides of the ball.

Chelsea did put up one goal against Oak Mountain’s defense, but the Eagles responded with three goals of their own to pull off a 3-1 victory to remain perfect and lock up the championship win.

From there, Oak Mountain had one more matchup against Whitewater (Ga.) High School. While the offense had its lowest output of its four games, Oak Mountain’s defense stepped up and picked up a third shutout of the event for a 2-0 win.

With the victory, the Eagles not only took home the championship win in the highest division of the tournament, but improved to 8-0-1 on the season.

So far this year, Oak Mountain has given up just three combined goals and has yet to give up more than one goal in any match. The team’s only blemish was a 1-1 draw with Huntsville, as the Eagles have yet to lose a game.

By ALEC ETHEREDGE | Managing Editor PELHAM – Following a Lakeshore Championship from the boys a week earlier, the Pelham... read more