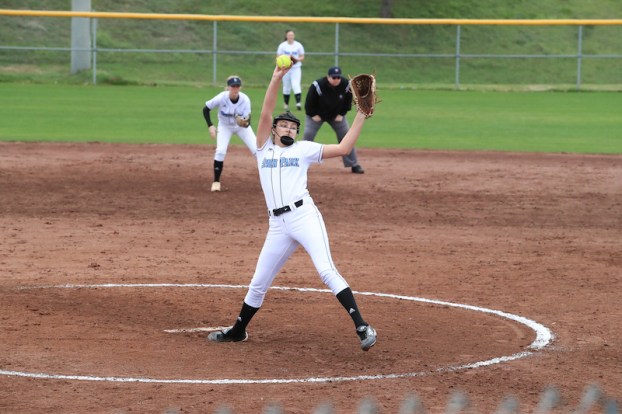 The Spain Park softball team finished a perfect 5-0 at the Leeds softball tournament to claim the championship on Saturday, Feb. 22. (For the Reporter/Dawn Harrison)

LEEDS – The Spain Park Jaguars improved to 8-0 on the season with five consecutive wins between Friday, Feb. 21, and Saturday, Feb. 22, to claim the 2020 Leeds Greenwave softball tournament.

After going a perfect 3-0 in the Thompson tournament to start the season, the Jags followed that up with five more wins allowing just two combined runs in the tournament and five total through their first eight games.

Spain Park’s wins in the tournament came against Oak Mountain, White Plains (twice), Pell City and Vestavia Hills. A recap from each game is below.

Spain Park kicked off the tournament by scoring two runs apiece in the second, third and fourth innings to post six runs, while Annabelle Widra tossed a complete-game one hitter in the circle to help the Jags pick up a 6-0 win.

Widra also totaled 10 strikeouts in the dominant four-inning performance to pick up the win.

Offensively, the Jags got the scoring started in the top of the second with a two-RBI single from Taylor Harrington. Then, an inning later, Maggie Daniels blasted a two-run home run over the center field wall to put the Jaguars on top 4-0.

Alexis Anderson then added the final two insurance runs when she hit a two-RBI double to left field that drove home both Harrington and Lydia Coleman for a 6-0 lead.

In the first of two games against White Plains, pitching continued to shine, as Ella Reed pitched a complete game allowing one hit and striking out 10, similar to what Widra accomplished in the first game.

At the plate, Spain Park picked up all the offense it needed when Lindsay Parker hit an RBI single to center field early in the second before Mackenzie Thompson scored on a fielder’s choice later in the inning.

Harrington, Anderson, Parker, Thompson and Daniels each had a hit in the game, while Widra and Parker had one RBI apiece.

Playing White Plains for a second game in a row, just a day later, the Jags new what to expect and it showed with their best offensive performance of the tournament.

They scored four in the first, one in the second, two in the third and one in the fourth to post eight runs, while Reed and Katherine Brown combined for a shutout in the circle. Reed went three more innings, allowing two hits and striking out six.

Spain Park’s offense got going in the bottom of the first on a solo home run from Widra to lead off. Later in the inning, following two singles in the middle, a fielder’s choice from Thompson and a single from Brittain led to three more crossing the plate for a 4-0 advantage.

The Jags then closed the game out on an RBI single in the bottom of the fourth from Harrington that cemented an 8-0 victory.

In the semifinals, Spain Park put up five runs in the first inning, which was more than enough for Widra in the circle, who allowed just one hit and no runs with nine strikeouts in a 5-1 win.

Pell City’s only run came in the top of the fifth off Brown, but Brown quickly closed out the win following that run.

Spain Park’s impressive first inning started with yet another solo home run from Widra to lead off, while back-to-back singles from Harrington and Coleman led to a two-RBI double from Anderson and an RBI single from Parker. Then, with two down in the inning, Daniels striped another single to left field that drove home the fifth and final run.

Coleman, Anderson and Parker each had two hits in the inning, while Anderson had two RBIs and Parker had one. Widra, Harrington and Daniels each had one hit.

The final game to determine the champion ended up being the most tightly contested as well.

Taking on Vestavia Hills, the Jags fell behind 1-0 in the top of the first but responded in the bottom half on an RBI single from Coleman to tie the game at 1-1.

From there, however, Reed became lights out in the circle. She didn’t allow a run the rest of the game and only gave up one more hit.

With her strong pitching, Spain Park was able to capitalize offensively in the bottom of the third when Widra led off with another solo shot over the center field wall.

That put Spain Park in front 2-1, but more was to come when Thompson laced a ball to center field with two outs that got down and allowed Harrington and Anderson to come home for two more insurance runs.

Vestavia had no answer in the top of the final inning, which led to the 4-1 victory for the Jags.

Harrington finished 2-for-2 with a run scored, while Thompson went 1-for-2 with two RBIs. Widra and Coleman each finished with one hit and one RBI.