By SASHA JOHNS / Special to the Reporter

If you were in downtown Columbiana on Feb. 22, you might have thought you had somehow traveled back in time to the Roaring Twenties of the early 1900s.

Long-time supporters of the SCAC were thrilled to be in a building designed for the vision they put in place years ago. 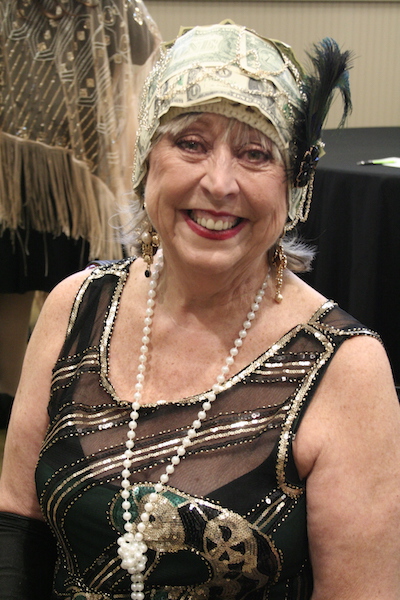 The winner of the best hat fundraiser for the third year in a row was Culture Club member Karen Sweeney. (Contributed)

The three women’s clubs of Columbiana, Culture, Vignette and Novella, rotate the management of the event each year, but all three play a role in the final product, each one taking on an aspect of service to make it a success the day it all comes together.

At its inception, the luncheon began as a fashion show. As attendance and interest in the Arts Council grew, the event became something a little more that people from all over the community began to look forward to each year.

As tradition goes, members from each club created themed hats that guests voted on with dollar bills.

Art donated by local artists was available for purchase in the lobby.

Guests submitted bids for baskets put together by each club in a silent auction.

Then, finally, there was the meal itself: Skewered chicken with vegetables, rice and Greek salad, created by Nancy Drakos of the Fish Market.

It was finished off with cherry-topped cheesecakes made by the women of each club.

Extra cheesecakes were also available for purchase at the end of the event.

During the luncheon, SCAC Executive Director Bruce Andrew delivered a speech to his audience and supporters, thanking them for their support and partnership in providing the help needed to bring the arts to Shelby County.

“Hope builds community, and it’s a commodity that we don’t see often enough,” he said. “If we infuse arts and culture into the community, it will raise the value of that community.”

And that is exactly what the goal of the Shelby County Arts Council is: To imagine, create and inspire the community around it.

The main entertainment of the afternoon came from the comedic musical group, Three on a String, which had guests laughing and tapping their feet.

From the Boy Scouts, who led the show with a pledge to the flag to the pageant winners who sang and provided photo ops for guests to the hard-working women of Columbiana’s social and service clubs, the event was a representation of how individuals and organizations in a community can come together to raise its value, just as Andrews suggested.