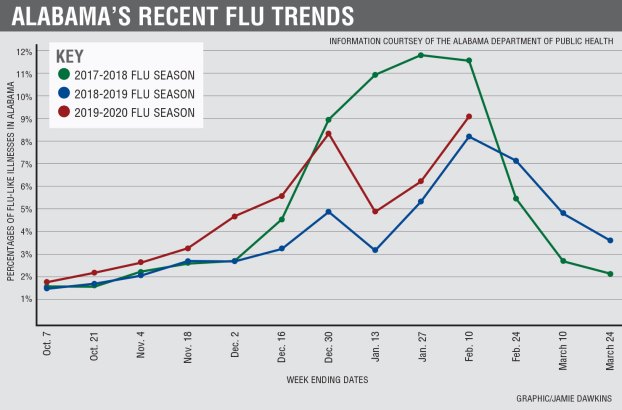 This graph shows flu trends in Alabama from 2017 to present day.

How does this year’s flu virus measure up?

The flu seems to be coming back for its second act as the number of confirmed cases have been on the rise in recent weeks.

Sarah Haskew, infection prevention coordinator at Shelby Baptist Medical Center, said flu season got started early this year and then it tapered off before coming back for round two. Widespread flu activity throughout the state began in November.

Haskew said it could be that people seem to be getting the flu all at the same time instead of the numbers remaining steady throughout flu season. She added that Alabama’s flu season usually begins in October and ends in March, but could be extended by the Center for Disease Control and Prevention based on certain criteria that’s used to predict when the flu will die down.

According to the Centers for Disease Control and Prevention, the overall effectiveness of this year’s flu vaccine is 45 percent. However, that percentage could change since the country is still in the midst of what is considered prime flu season. There’s also still time for another strain to emerge.

That’s exactly what happened during the 2018-2019 flu season, according to reports by the CDC. A late-season, brutal flu strain turned out to be more than the vaccine could handle and that season’s vaccine effectiveness ended up being just 29 percent. But regardless of unforeseen flu strains, experts still urge people over 6 months old to get the flu shot because it’s the best defense against the virus.

However, nationwide this flu season has been especially bad for children, according to CDC. Ninety-two pediatric deaths had been reported throughout the nation as of Feb. 8, the highest number since the 2009-2010 flu season when 262 pediatric deaths had occurred by this point in the season.School systems throughout Shelby County have reported that although a steady number of students have been absent from school because of the flu, absentees haven’t reached at level of concern.

At Oak Mountain High School, a small flu outbreak caused the school’s basketball games on Jan. 31 to be canceled. Eight of 13 junior varsity players, six of 10 varsity players, and two of four coaches were sick with the flu. Cindy Warner, Shelby County Schools public relations supervisor, said the outbreak was contained to the basketball team.

Throughout Shelby County Schools, Warner said the number of students absent with the flu has not reached an alarming number. Schools aim to remain below a 10 percent absentee range, and Warner said none of the schools in the SCS system have exceeded 10 percent. For comparison, Oak Mountain High School reached 4 percent absentee during its small flu outbreak. Shortly after the Oak Mountain outbreak, Warner said Chelsea Park and Helena elementary schools saw higher absentee rates but it’s hard to say if those absences were flu-related.

“There could be a variety of other reasons why a child is out sick, like strep throat, respiratory viruses or stomach bugs,” Warner said. “We can’t say for sure until we get sick notes or doctors notes from the students.”

If a school does reach 10 percent absenteeism, the school nurse begins making phone calls home to find out why a child has been absent, and to make sure an illness isn’t spreading throughout a school.

For Pelham City Schools, Communications Manager Nicole Knight said the flu hasn’t caused any major disruptions for students. The district’s numbers have not been high so far, which Knight said might be because the flu vaccine was offered to all students at the start of flu season last fall.

“We are hoping that this has played a part in the lower cases of flu in our system,” Knight said. “Nurses at all of our schools continue to educate students and staff on the importance of handwashing, covering your coughs and sneezes and staying home when you are sick.”

Jason Gaston, coordinator of public relations for Hoover City Schools, said the district maintains a weekly report of the number of students absent with the flu. During the week of Feb. 3-7, Gaston said there were 112 reported flu cases diagnosed by a physician. That number accounts for teachers and students who were out sick. For a school system with 14,000 students and 2,100 employees, Gaston said overall HCS is in good shape.

Data from the ADPH stated that confirmed cases of the flu have been on the rise in recent weeks. Over the past few weeks, the percentage of flu-like illnesses reported by the ADPH has increased in the Northeastern district, which encompasses Shelby, St. Clair, Talladega, Clay, Blount, Etowah, Calhoun, Cleburne, DeKalb, Cherokee and Randolph counties.

National and state flu information is updated regularly. For more information about the flu, visit Alabamapublichealth.gov/influenza/index.html or CDC.gov.