PROFILE: Birmingham’s go-to guy for firewood delivers it himself 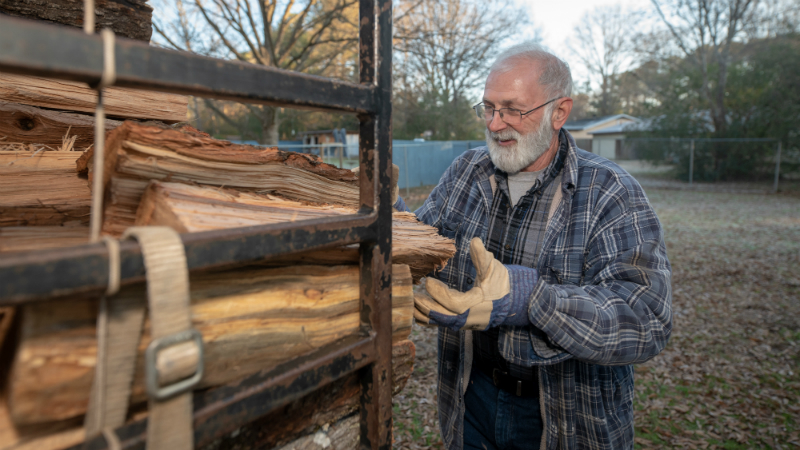 Rodney Rosetta drives from his home on the Coosa River off Lokey Ferry Road in Wilsonville to the work site where firewood is prepared and loaded for delivery to homes and businesses across the Birmingham area. (REPORTER PHOTOS/KEITH MCCOY)

In the winter, when business is really booming, Rodney Rosetta rises as early as 4 a.m. at his home on  the Coosa River off Lokey Ferry Road in Wilsonville, hops in one of his seven work trucks—all Chevrolets—and makes the short drive to the two acres of property where the work goes down.

This time of year, with the leaves gone from the trees, Rosetta can almost see his home from the work site, which is good because it means he can get an early start loading up firewood that will be delivered to residents and some of Birmingham’s most respected restaurants.

The story behind how 67-year-old Rosetta turned into perhaps Alabama’s most trusted firewood delivery man is more practical than romantic, but it gives insight into the qualities that have made him successful.

Rosetta was born in Baton Rouge, Louisiana, but his family moved to the Cahaba Heights area when he was 3 years old—too young to remember the move. In his 38 years as an employee of American Cast Iron Pipe Company in Birmingham, he was stranger to hard work, including taking on odd jobs for a few extra dollars. 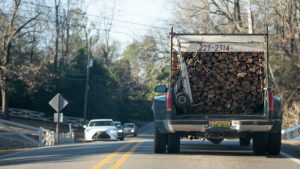 Rodney Rosetta estimates his customer base grows by about 10 percent each year simply through word-of-mouth.

One such job was lawn care. Rosetta would throw his mower in the back of his truck, and when his shift ended at ACIPCO, he would spend evenings and weekends mowing lawns. But his full-time job often included longer hours and overtime that made him miss planned yard work.

So he decided to try selling firewood. He could split firewood and load it in his truck the night before, he figured, and no matter how late he had to work at ACIPCO, he could still make his deliveries, even in the dark.

Business grew organically by word of mouth, and because of Rosetta’s commitment to doing things the right way. Eventually, he retired from ACIPCO in 2010 and focused on firewood full time. Without enough regular customers to fill his days with deliveries, Rosetta spent a lot of time sitting beside busy roadways with available firewood and a sign, often near the bridge over the Cahaba River just off U.S. 280. It was there that Rosetta settled on a name for his company. “I would see trucks go by, Two Men and a Truck or whatever, and I said, ‘Hell, why not One Man and a Load of Firewood?’” he recalls.

Today Rosetta runs his business as he always has, making all the deliveries himself—10-12 a day depending on the volume and locations of the stops, but with a growing customer base, he needs help. Two to three workers split wood eight hours a day, five days a week, at the Wilsonville work site.

Wood comes in by the 18-wheeler load, about 25 loads a year. Cultivating a list of contacts—loggers in Wilsonville, Harpersville, Maplesville and other locations—has been important to ensure Rosetta never runs out of wood. “When folks call, you’ve got to have it,” he says. 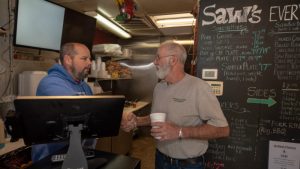 One Man and a Load of Firewood delivers to several well-known restaurants in the Birmingham area, including Saw’s BBQ.

Rosetta also goes out to cut trees and gather wood from time to time, but that is not his primary source. At the work site off Alabama 61, the wood is split and allowed some time to “season” before being loaded for delivery at $180 for a full load or $100 for a half load.

Rosetta estimates that his revenue is split pretty evenly between residential and commercial customers. Someone from Carabba’s Italian Grill just up the hill from the Cahaba River bridge on U.S. 280 found Rosetta posted up there when the restaurant’s regular supplier could not fulfill an order, and Carabba’s has remained a loyal customer since.

Another is Saw’s BBQ. General Manager Anastasia Menefee, who goes by “Ms. A” at the Homewood location of Saw’s, says Rosetta has been delivering firewood to the restaurant longer than her 13 years on the job. In fact, he provided wood when it was called Broadway BBQ.

As sure of a thing as death and taxes, Rosetta makes sure Saw’s has plenty of fuel for its barbecue pit that produces mouth-watering pork and chicken. “We’ll call him when we need him, but he’ll come by and check to see if we need anything,” Menefee says. “He’ll deliver early in the morning or late in the evening, whatever we need.”

Rosetta’s commitment to making it as easy as possible for his customers has served him well. Folks know that when they call him in need, he’ll be there. That’s why those who have worked with Rosetta in the food service industry are usually eager to share positive reviews of his service with their peers. 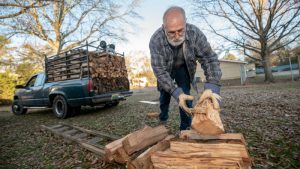 Wood comes in to the site off Alabama 61 in Wilsonville by the 18-wheeler load, about 25 loads a year.

Word-of-mouth spreads among residential customers also. “People visit and see how good the wood is burning in their fire pit, and they tell them where they got it,” Rosetta says. “Then we have new customers. I have about one customer a year that’s not happy. If they’re not happy, I go pick up the wood and give them their money back.”

Rosetta estimates that his customer base grows about 10 percent each year. He’s up to 25 restaurants, including Birmingham’s Hot and Hot Fish Club and Firebirds Wood Fired Grill. No matter how many people call, Rosetta is committed to delivering their wood the same day or the next day. “I don’t make them wait,” he says. “I’ve run wood all night long and only got two hours of sleep.”

That is why Rosetta says that anyone wanting to sell firewood for a living must be prepared to work hard: “I’ve never been scared of work. I enjoy it all. If I didn’t, I wouldn’t be doing it.”

One Man and a Load of Firewood Clients