Dalton Perryman, 18, allegedly robbed the Chevron store in Columbiana before fleeing the building and attempting to carjack two vehicles whose occupants were in the parking lot, according to a Columbiana Police Department press release. 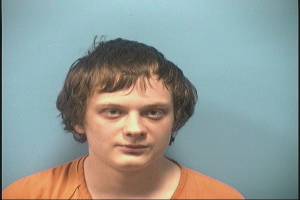 “The offender came into the Chevron, demanded money, produced a pistol and threatened the clerks,” the release read. “At one point, he came around the sales counter and assaulted one of the clerks, injuring him. The pistol later turned out to actually be an airsoft pistol.”

After the alleged attempted carjacking, Perryman was arrested about a block away in an alley off Main Street, the release read.

“Within a minute, an officer was on the scene of this crime, and they were pursuing the offender,” CPD Chief Jeff Bowers wrote in the release. “He was arrested immediately, and while they were doing so, Southeast Shelby Medical Rescue was caring for the injured clerk. We thank them for their assistance, as well.”

Perryman is being held in the Shelby County Jail on a $60,800 bond.