On Friday, Feb. 21, students invited guests to visit their classroom and listen to them read fairytales they each had written as part of a multi-faceted activity designed to hone their reading and writing skills, according to Lackey.

After reading well-known fairytales together in class, students were tasked with creating their own stories, complete with different characters, plots and hand-drawn scenes.

Lackey encouraged them to dress up as the main characters in their stories for the day of sharing, which she called the Fairytale Ball.

“This is called showcasing their writing, for them to show their hard work,” Lackey said. “It builds that intrinsic motivation and gets them excited.” 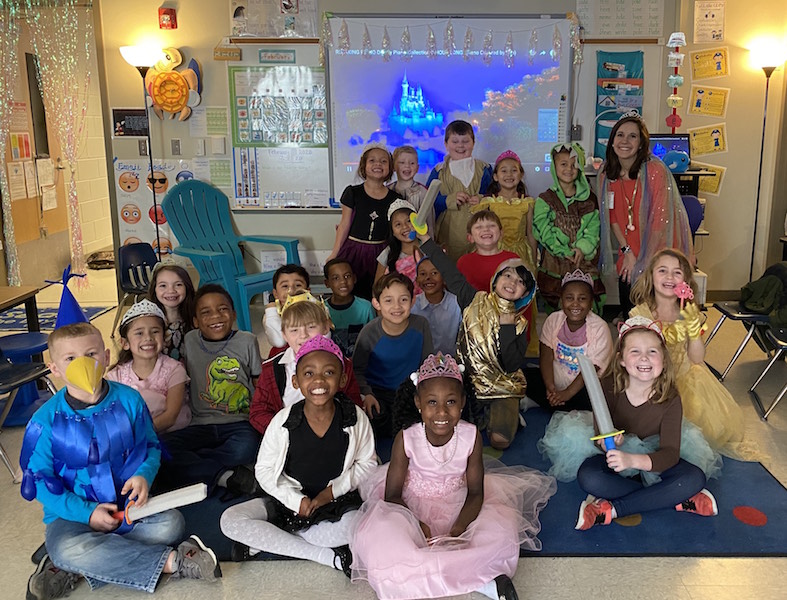 First-grade students in Andrea Lackey’s class at Montevallo Elementary School don costumes for their fairytale ball, at which they shared the stories they wrote with guests. (Contributed)

Eason Serrano wrote a tale titled “Bootly and the Princess.” Riah Guerrero wrote about a protagonist named Princess Tootsie. Journey Peterson’s pink sequined dress was a nod to the main character in her story, “Princess Pom.” And Brayden Nolen wrote “Boo and the Princess,” which he read aloud to MES custodian Bob Stricklin, also known as “Mr. Bob.”

Lackey said students made invitations for their chosen guests – other teachers, school staff and parents.

“They invited whoever they wanted to,” Lackey said. “They hand-delivered their invitations.”

This marked the second year of Lackey’s fairytale ball.