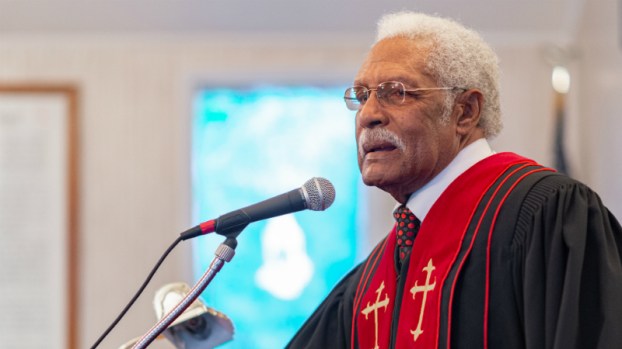 W.J. Posey was baptized by P.E. Kidd when he was 6 years old, in Spring Creek near Vincent, and says he was first called to minister just a few years later not far away. (FOR THE REPORTER/JEREMY RAINES)

Each Sunday the routine is the same for Pastor W.J. Posey. The 80-year-old arrives at Coosa Valley Baptist Church in Vincent about 9 a.m. The bulletins have been printed, yes, and all the lights are working, good. He sits at the desk in his wood-paneled study and goes over his notes one last time before Sunday School at 9:30 and the worship service at 10:45, just as he has done for the last 43 years.

Though he has brought more messages from the pulpit than he can remember, the services at the small, rural church still mean much to him. It’s a chance for people to refresh themselves spiritually, to put aside or seek help with the week’s worries, to sing and to hear God’s word.

Sundays are a time of fellowship at Coosa Valley Baptist Church. For most people, it’s the only time each week they spend physically at the church, perhaps other than Wednesday night Bible study. Posey, of course, is more involved. He stops in every so often to check on things, and more frequently if a project is going on that requires his attention, such as one of the church’s many renovations and additions during his tenure.

But Posey’s faith is even more immersive. In fact, it’s all-encompassing. “There’s not really anything I do other than church,” he says. “People ask me why I don’t do this or that. I don’t have time to do that. I spend time studying (for messages he I will deliver), but that’s about it.”

And his story has tied to the land, and waters, around the church his whole life too. Posey was baptized by P.E. Kidd when he was 6-years-old, in Spring Creek near Vincent. He notes that subsequent baptisms have been conducted on the east side of the Alabama 231 bridge over Spring Creek, but he was dipped under the water on the west side of the highway, closer to where the creek feeds into the Coosa River.

He says he remembers when he was first called to minister just a few years later not far away. As a 9-year-old, he was outside playing with siblings and friends when he sat down on the side of a dirt road, on the root of a tree where the soil underneath had been washed away.

“All of a sudden, everything in my view changed,” Posey says, gesturing his hands out before him. “I had never seen anything like it. I ran and told my mama that something had happened. She said, ‘The Lord wants you to be a good boy.’ From that day on up to now, my life has changed.”

Posey considers his life-changing experience more important than any degree. “I think every preacher ought to have some kind of testimony,” he says. “I went to school for a little while when I was in Baltimore, but I didn’t finish because I had to leave. School doesn’t make you; the Lord has to make you.”

Posey’s formal ministry began in 1968, when he stepped out on faith and moved to Baltimore, Maryland. It was his first time away from his Pell City home, but church and a gospel singing group, the Starlights of Baltimore, helped connect him with the community. Posey also worked at a textile mill and drove a taxicab while in Baltimore. Later, Bishop Leo K. Caesar of the First Mt. Olive Freewill Baptist Church established the a Second Mt. Olive church and installed Posey as pastor. Posey left the Starlights after about five years but continued his work as pastor.

Meanwhile the pastor who baptized him Kidd washad been pastor ofserving at Coosa Valley Baptist Church for about 39 years but while he also pastored Mt. Zion Baptist Church in Pell City, where a young Posey attended with his mother and where he is still a member. “The members of this church don’t know no other pastors,” Posey says about his and Kidd’s long tenures. “I must have been a pretty good fellow for them to keep me around this long.”

Posey returned home in 1976 to care for his ailing mother without knowing a plan for where he would work. “I didn’t know what I was going to do when I came back,” he says. The folks in Baltimore wanted him to stay, but Posey knew what he had to do. “I said, ‘There’s a lot of pastors in Baltimore, but I’ve only got one mama.’”

His tenure at Coosa Valley began on the third Sunday in April, and in less than a year, he had been hired at a second church, Wilsonville First Baptist, though he would later give up that church so he could focus on Coosa Valley. Posey has become a patriarch of sorts for pastors in the area, and he can attribute at least some of his effectiveness and longevity to his support system, including the late Mary Ellen Kidd, who current church member Bridgette Jordan Smith remembers as “the epitome of a Southern lady.” “She was the kind of person that did everything at the church—a lot of stuff that people didn’t know of,” Jordan Smith says.

One thing people did know about was Kidd’s role as director of the annual Easter program. “She would give you your lines, and you better know every word of it,” Jordan Smith says with a laugh. “She was tough, but she taught us a lot.”

Jordan Smith grew up at Coosa Valley. Her great-grandfather, Nash Hardey, was chairman of the church’s deacons. She had the unenviable task of replacing Kidd when she passed in the late 1990s. As church secretary, she keeps Posey’s calendar, maintains financial records, distributes announcements—and has had a first-row seat to witness Posey’s time leading the church.

“He’s a God-fearing pastor,” Jordan Smithshe says. “He has so much knowledge and wisdom. You can sit down and talk with him, and the conversation will always end up in the Bible. He always has a word for you.”

Over the years Posey has seen his congregation age—and pass away. “There’s been a lot of funerals,” Posey says. “That’s what really gets to a pastor is doing funerals.” And though church attendance is about half of the 300 people who regularly showed up when he started at Coosa Valley, the church has grown in other ways through the years.

The original church building was constructed in 1907, but a major addition and renovation project was completed in 1989. The existing building received new benches, new stained glass windows and a new sound system. New construction included Sunday School rooms, a pastor’s study and a dining area with kitchen. Also, at the front of the building, a new covered entrance was built with a wide wheelchair ramp that is conducive to hosting funerals.

It’s in that study that Posey spends his last few moments of quiet time before church officially begins on a Sunday morning. Once he’s comfortable with the message he will deliver to the congregation, Posey selects the appropriate robe from the closet and shuts off the light of the study as he walks out.  After 43 years, there is certainly a routine, but he doesn’t see it that way. For Posey, it’s another opportunity to make a difference in people’s lives.

ALABASTER – There was standing room only in the large meeting room at the Shelby County Instructional Services Center as... read more