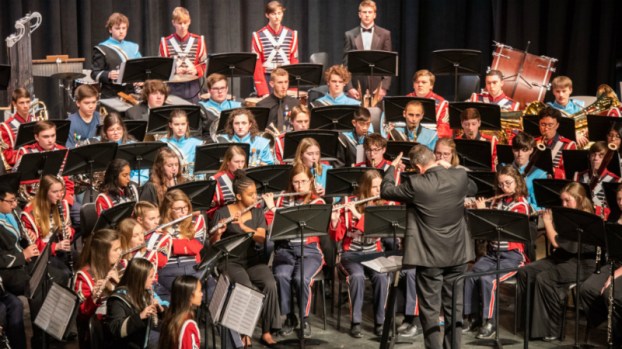 The Honor Band is a select group of middle and high school band students chosen by audition that rehearse and perform together over the course of one weekend each year, OMHS Associate Director of Bands Travis Bender said.

Auditions for those interested in a spot in the Honor Band were held Jan. 14 at Helena Middle School.

After the members were selected, rehearsal was held on Friday, Feb. 21, and Saturday, Feb. 22, with the event culminating with a concert at 2 p.m. on Feb. 22.

Galante has composed music for four films and served as orchestrator for more than 60 studio films, including well-known works such as “Avengers: Age of Ultron” and “The Wolverine.”

Grant is an Atlanta-based composer of music for concert bands, marching bands and chamber groups, many of which have performed around the world. His works have been found on Editor’s Choice lists from various international music distributors.

The concert was free and open to the public, and Bender said there was a good turnout, with all of the 500 printed programs being utilized.

Those in attendance also had the opportunity to see scholarships presented to two Honor Band members.

The $1,000 scholarship for a high school senior and $500 scholarship for a middle school eighth grade student are provided by the Shelby County Band Directors Association and funded by admission charged for the Showcase of Bands event each year in the fall.

Eligibility requirements include that a student be participating in Honor Band for the second year, and that recipients plan to continue studying music (in college for the senior, or in high school for the eighth grader).

Applications include an essay about what lessons the students have learned through participation in band, and the Association votes on recipients.

PROFILE: Stevie McGinnis is doing more at Vincent Middle High School than what meets the eye

Vincent Middle High School would not be as bright without maintenance technician Stevie McGinnis. When a lightbulb burns out, he’s... read more