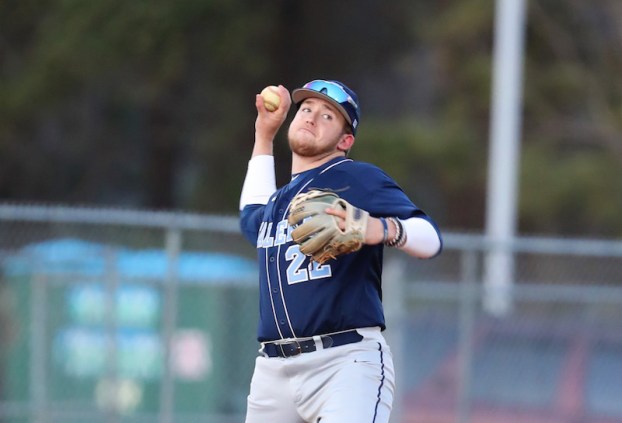 The Calera Eagles put together a strong performance on the mound to hand Thompson its first loss of the season on Feb. 26. (File)

CALERA – A combined one-hitter from three different pitchers and a three-run fourth inning helped the Calera Eagles hand Thompson its first loss of the season on Wednesday, Feb. 26.

The Warriors entered the game with a perfect 5-0 record, but Matthew Bullard, Nick Bunn and Jaxon Butterworth combined for seven strikeouts and just one hit to shut the visitors down and pick up a 3-0 shutout victory.

For the first three innings, both teams struggled to find an offensive rhythm. The two teams only had one combined hit and four combined walks in that span.

But after a quiet top of the fourth from the Warriors that featured a walk and three straight outs, Calera finally found some consistency at the plate.

It started when Thompson opened the door early in the inning by committing an error on the first at bat and then walking the second batter to put runners on first and second.

A wild pitch during Butterworth’s at bat moved both over, before he ripped a ground ball to right field for a single that brought home Riley Gay for the game’s first run. Dylan Killingsworth then came home on an error from the right fielder, before Graham Blankenship singled home Butterworth for a 3-0 lead.

After allowing one more single to put two runners on with still no outs, Thompson did a good job of limiting the damage by picking up three consecutive outs.

That kept the game from getting out of control, but Calera’s pitching had more than enough of a cushion to close out the rest of the game.

The Warriors led the top of the fifth off with a double looking to start a comeback, but that was their final hit of the game as only two more baserunners reached safely with Calera’s pitching controlling the game.

Bullard got the start on the mound and was basically flawless. He went five innings and allowed four walks and one hit while striking out six. Bunn pitched 1/3 of an inning, while Butterworth tossed the final 1 2/3 innings allowing no hits or walks and striking out one to close out the victory.