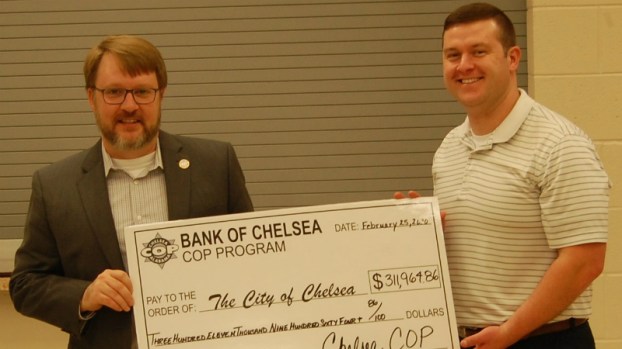 Chelsea City Councilmen Chris Grace, left, and Casey Morris accept a mock check from the Chelsea COP representing the number of volunteer hours the organization contributed to the city in 2019. (CONTRIBUTED)

CHELSEA – The Chelsea Citizens Observer Patrol organization held its 21st annual awards meeting on Tuesday, Feb. 25, recognizing numerous members for their service to the group and the city.

Representing the number of volunteer hours by COP members, a mock check in the amount of $311,964.86 was presented to Chelsea officials.

The total number of volunteer hours contributed by active members through the end of 2019 is 100,804 hours.

Awards presented at the meeting included:

ALABASTER — An Alabaster man was arrested on Feb. 26, accused of causing extensive head trauma to his infant daughter.... read more