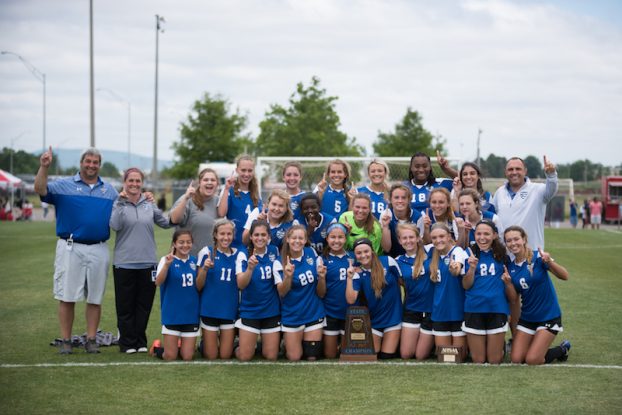 Chelsea soccer coach Jonathan Hammett, far left, picked up his 200th career win as a head coach in a 2-1 victory over Cullman on Wednesday, Feb. 27. (File)

Jonathan Hammett has been a household name for many years in Shelby County as the girls soccer coach of Chelsea High School and on Thursday, Feb. 27, the storied coach added one of his most special accomplishments to date with his 200th career win against No. 5 Cullman.

In the win, the Hornets took down the Bearcats 2-1 after grabbing a 2-0 lead early on, as they eventually held on to pick up the historic victory for their head coach.

With the win, Hammett added one of many impressive accomplishments as a head coach that runs deeper than his time with Chelsea.

But just coaching the Hornets, he’s had a career most coaches would love to have. He’s taken his team to the state championship four different times in nine seasons and won two championships with multiple Final Four appearances in addition to that.

Now, with 200 wins, he’s cemented himself as one of the best coaches in state history yet again, as he looks to lead his team to another strong run to a possible Final Four in 2020.

Impressively, the win didn’t come against a lightweight team, as the Hornets squared off against a Cullman team capable of winning a championship as well.

Early on in the game, the Hornets had their chances, but Cullman sophomore goalkeeper Gracie Barksdale staved off two breakaway goals in the first 20 minutes.

“She’s one of the most athletic keepers I’ve seen in a long time with range and can almost fly when she leaps,” Hammett said. “They’re a young team and are going to be good for the foreseeable future.”

But she was having to stave off a constant attack from Chelsea’s talented forwards who put multiple shots on goal.

Eventually, Haley Duca and Tori Franklin were able to capitalize off rebounds with put back goals to put Chelsea up 2-0 midway through the opening period.

Hammett said the Hornets could have been up three or four during that stretch, but Barksdale and the speed of Cullman at each level kept the game close.

Eventually, the Bearcats capitalized and got within one goal at the break.

That led to a stalemate the rest of the game, as neither team could beat the other’s keeper, which allowed Chelsea to hold on for the historic win.

Hammett mentioned his thanks to all previous players he had coached, knowing that each contributed to his 200 wins.