Vanderslice gives back through home church

Despite being a diabetic and the concern of the onset of a thyroid disorder, Ann Vanderslice is vibrant, confident and optimistic.

“I’m a people person,” Vanderslice said. “Helping others is one way I stay active, which gives me a certain measure of peace.” 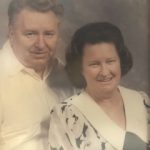 A member of Aldrich Assembly Pentecostal Church in Montevallo for the past 12 years, Vanderslice loves her church family and looks forward to seeing them each week.

She is involved in her church, where her culinary skills are often on display.

She works with the Kitchen Staff, busily preparing food for a number of different events such as meals for a funeral repass and assisting with fundraising events.

She enjoys Bible class, and fellowship with the women there and in the community.

A number of women congregate for quilting.

Vanderslice not only helps at her own church, but she has given much of her time and energy at Enon Baptist Church as well.

Because cooking is her forte, Vanderslice is often involved in holiday meal planning and preparation at Enon.

She has assisted with preparing food for Yesterday’s Youth (a seniors group) and for funeral repasses.

Vanderslice also works with a group that prepares food for fundraising for the University of Montevallo’s Student Missions program.

One such mission was a trip to Louisiana to aid flood victims.

Previously a member of Montevallo Homemakers and Community Leaders (MHCL), her commitment to her current activities have not afforded her time to be as active in the program.

However, she is occasionally involved with the program’s work at Centreville Nursing Home, in which dolls made by MHCL are stuffed by the residents at the nursing facility. The craft activity provides enjoyment, physical and cognitive stimulation to the residents, who are also entertained by a choral rendition provided by MHCL.

“I was raised taking care of people, my grandparents, an uncle…,” said Vanderslice, who turns 81 years old this year.

The baby of five children, she was raised in Pine Hill, Alabama.

Although widowed since 1993, Vanderslice is never by herself.

She lives a full and physically active life, looks forward to each new day with joy and tenacity, and relishes time spent with her siblings, 13 grandchildren and three great-grandchildren.