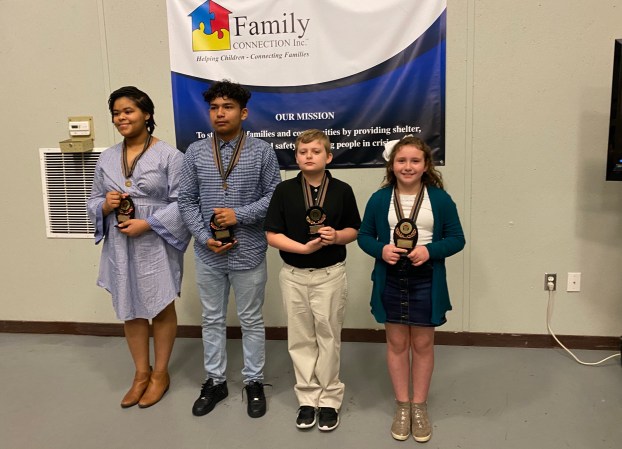 The Character in Action awards program was established five years ago as a joint partnership among local school systems, the District Attorney’s Office, juvenile court Judge Jim Kramer and Juvenile Justice to honor students who have consistently made good choices and have made a positive impact on their schools and communities. In addition to honoring students, the program recognizes the parents and caregivers who have raised these students and who continue to work hard to support their success. The program recently welcomed a new partner, Pelham’s American Legion Post 555.

Each school nominates one student for an award, and teachers and principals provide written examples of why that student deserves to receive a Character in Action award.

Calera High School student Elyssah Long, daughter of Arnetta and Dedric Spencer, is always respectful, according to the statement written about her.

“She offers kind words to peers and is always willing to help,” the statement reads. “Elyssah has an impressive GPA and is consistently an honor roll student. She seeks opportunities to be challenged academically.”

Long is a member of Peer Helpers at her school and is member of Big Brothers/Big Sisters. In addition to being kind-hearted, she is credited with being non-judgmental, morally sound and genuine. Her goal is to become a writer and she consistently engages in opportunities to become more knowledgeable about her post-secondary plans.

Calera Middle School student Alex Pecina, son of Amalia Amaro, shows maturity and works hard to be a great example to his peers in the classroom as well as on the football field, according to written statements about him.

“He asks for help when he needs it, and he also makes sure that those around him know that he will not tolerate nonsense,” the statement reads. “As a leader in his friend group, his friends look to him for guidance and direction. He joined the football and soccer teams this year and has been a model athlete for the school.”

Pecina doesn’t have to be asked to help others. He willingly steps up to the plate. For example, when a new student who didn’t speak English started at the school, he recognized the need and got the student from the bus area to the office. Pecina also volunteered to escort the student around the school and to translate for him. He left his classes early each period to go get the student and to make sure that he made it to his next class on time and without problems.

Calera Intermediate School student Rylan MacDonald, son of Jennifer and Eric MacDonald, was described as a student who treats others with respect and always uses polite and kind language with peers.

“He does not raise his voice when upset with peers,” his statement reads. “Instead, he talks through the issue or goes to an adult. He tries to use words to solve his problems.”

He can be counted on the clean up after himself, keeps up with his materials and schoolwork and does what he knows he is supposed to do with prompting. He is always ready and willing to help other students. For example, if another student drops, spills, or forgets something, he is the first to step in and assist, no questions asked.

Calera Elementary School student Blair Seales, daughter of Krystin and Thomas Seales, is said to always have a smile on her face. She believes everyone is a friend.

“I have seen her leave a close friend of hers to play with another because they were being treated unfairly,” a teacher wrote about her. “In small group, Blair lets others go first because, as she told me, she hates seeing her friends upset. It takes courage to be a leader even when nobody is looking, but Blair has always stayed true to that.”

When interacting with others, peers or adults, she always engages by looking, listening and will respond with rich conversation, her teacher states. She understands her role in the classroom and will step in as a leader when she feels the need. Seales understands that there are good and bad consequences for behavior. Anytime that she earns a reward, she never gloats about it. If she makes a mistake, she always tries to learn from it.