Chism a fixture at local churches

“My life has been pretty much about serving the public. I enjoy working with people. I have a servant’s,” Jerome “Joe” Chism said. 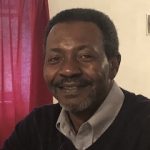 Jerome “Joe” Chism serves two area churches, doing repair work and leading as a deacon at one of the churches. (Contributed)

A debilitating injury compromised his ability to work and left him “hardly able to walk” for three years.

He describes himself as “semi-retired” since 2012, immersing himself in doing for others through volunteering.

His skill at a wide range of tasks include trade skills, interior and exterior repair and maintenance work.

He has dedicated his time and services to two different area churches.

Last year he laid floor tile in the church’s fellowship hall all by himself.

From changing sanctuary lightbulbs to hanging sheetrock, he is the go-to person concerning any repair or construction issue.

In addition to his work at Saints Assembly, Chism serves faithfully at Shiloh Missionary Baptist Church, where he joined as teenager.

He became an ordained deacon in 1995 and is the senior deacon of the deacons’ board.

He also serves as trustee and previously secretary of the board of trustees.

He assists the pastor during baptism and communion.

Chism has done many things, from conducting offertory to overseeing lawn care to painting to repairing leaks to floor work.

He said he looks forward to fellowship each week at the 114-year-old church.

An Alabama native, Chism graduated high school with honors. He earned an A.A.S. in electronics in 1979 and an A.S. in computer programming in 1981.

During his college enrollment, Chism worked a series of part-time jobs, his primary employer being Winn-Dixie. Over a 20-year period, he rose to the position of assistant store manager.

He has decided to seek re-election as commissioner for a sixth time in Bibb County this year.

Four years ago, Jerome found love a second time and made LaVerne Gaines his wife.

The couple have three children and five grandchildren.

Jerome joins the ranks of RSVP as a newcomers.