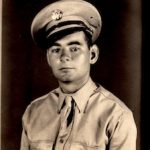 “The American Village is pleased to join the Shelby County Reporter in recognizing Master Sergeant John Landon Smith as Veteran of the Week,” American Village founder and CEO Tom Walker said. “He is representative of the hundreds of thousands of Alabamians who have risked it all for the sake of our country and its freedom. To all veterans we owe a debt we can never fully repay.”

John Landon Smith was born in Tuscaloosa in 1925. He entered the United States Army in April, 1944 at the age of 19, and served in the medical corps in France and Germany during World War II. He also served stateside during the Korean War at Walter Reed Hospital in Washington, D.C. After Smith’s formal period of service was concluded, he continued to serve his country in the Army Reserves until the mid 1960s. He died in 2018 and is buried in Tuscaloosa.