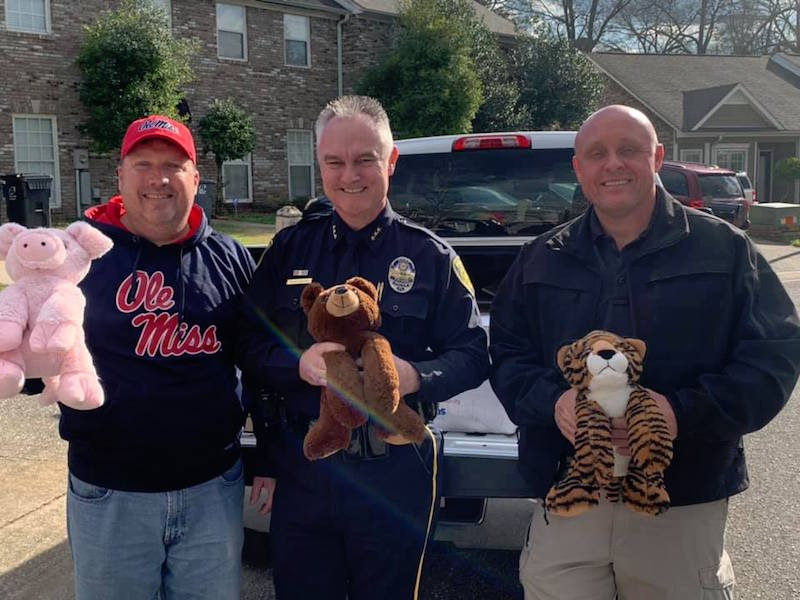 Pelham’s John Turner, left, recently donated a large amount of stuffed animals to the Pelham Police Department to help assist children that may be in stressful situations. (Contributed)

PELHAM – John Turner, owner of Turner Promotions, recently donated a large amount of stuffed animals to the Pelham Police Department to help officers assist children who may be in crisis or other stressful situations.

“I had seen some news articles and stories where people had made similar donations to police departments from other cities,” Turner said. “I knew I had a lot that had built up over the years, so I decided to reach out to PPD Chief Pat Cheatwood and see if they would accept these as a donation.”

Turner said he ended up donating more than 11 boxes of stuffed animals estimating around 50 individual pieces.

Police officers often keep stuffed animals like these in their patrol vehicles in case they come in contact with a child who is going through a crisis or some other type of stressful situation.

“The patrol officers keep two or three of them in their cars, so if they encounter a child who is in crisis they have something that they can use as a tool to help comfort them in a high stress situation,” explained Ainsley Allison, community relations coordinator for Pelham PD.

“I have seen an officer give a stuffed animal to a child who was on a call close to our building,” she said. “As soon as the child got the animal it completely changed her mood and proved that it’s a good tool for our officers to have.”

Turner explained that he wanted to do so some good for the community that he has long been a part of, and wanted to help the police department which he has close ties with.

“I’ve known Chief Cheatwood for a while, and I’ve been in Pelham since 1995,” he said. “ I love living here, and I just wanted to do something for my hometown and donate those. To put them to good use and help children who may be going through a stressful situation.”