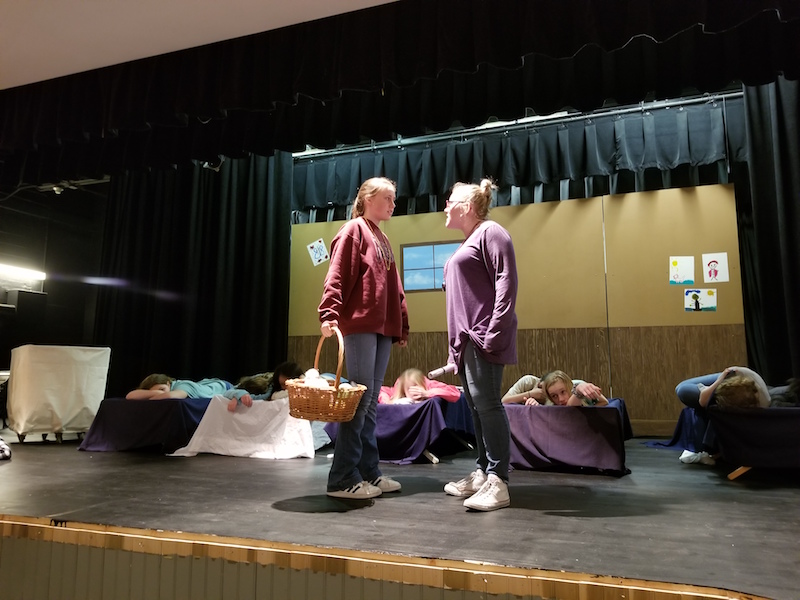 COLUMBIANA – Shelby County High School’s spring theatre production of Annie this month will deliver the well-known story of a young orphan girl—but with the addition of an unexpected cast member.

Main character Annie’s dog, Sandy, will be played by a local shelter dog named Triton Daniel, who is up for adoption at the Shelby Humane Society.

“The idea is to find ‘Sandy’ a home, as well as bring awareness to the Humane Society,” SCHS theatre teacher Kathryn Myrick said. “Triton is a husky/boxer mix who, sadly, was surrendered by his owners after they got a new puppy. He’s roughly 7 years old, but full of energy, typical of both breeds, and is looking for his forever home. Triton has also been at the shelter longer than most of the other dogs, and we thought that this exposure may lead to him being adopted.” 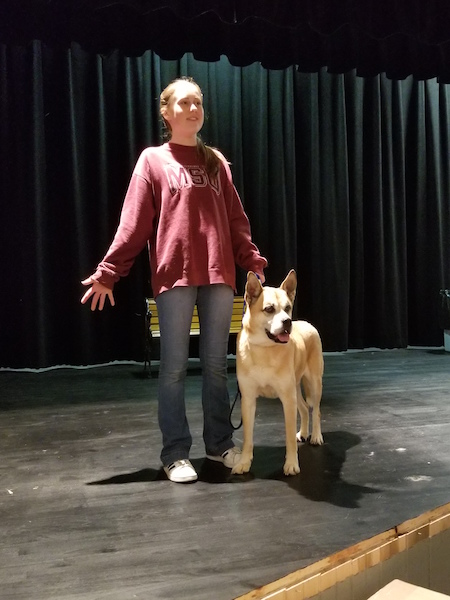 Sandy’s role is prominent from the beginning of the show. After Annie runs away from the orphanage, she discovers Sandy, a stray, wandering around the slummy side of town, Myrick said. The first scene requires Sandy to come to Annie on command and accompany her during her feature song, “Tomorrow.”

“Sandy instantly bonds with Annie, and Annie keeps Sandy safe from the dog catcher and a policeman,” Myrick said. “Sandy shows up after the huge cast number, ‘NYC,’ searching for Annie on the streets of New York City, and again at the end of the show. Oliver Warbucks, the billionaire who adopts Annie, finds Sandy, has him washed and has his staff tie a large Christmas bow around his neck. On Warbucks’ cue, three characters, Officer Ward, the Dog Catcher, and Bundles McCloskey, surprise Annie and enter the Warbucks’ mansion with Sandy on a leash. Annie is thrilled to find that not only is she no longer an orphan, but neither is Sandy.”

Myrick said the idea to cast a live dog in the role of Sandy surfaced during a discussion in her Technical Theatre Production class.

Myrick told her students that some schools use a child or small actor to play Sandy while wearing a dog costume.

“When I mentioned this, all of my tech students, almost in unison, said, ‘You need to use a real dog,’” she said. “I agreed with them, but wasn’t sure where to start. One of my students asked, ‘Why not use a dog from the Shelby County Humane Society?’ I loved the idea, and so did the rest of my students, so from that point we contacted the Shelby County Humane Society, and while it was a very unusual request for them, they were also excited.”

The students began rehearsing with Triton on March 2. Sandy’s handler is a student in the play named Savana Tarwater, who is also an employee at the Shelby Humane Society.

Tarwater hand-picked Triton for the role and will be responsible for training him in his role, his transportation to and from Shelby Humane to SCHS, and his lodging over the weekends, Myrick said.

“Our goal is to find Triton Daniel, and other animals like him, a loving home,” she added. “Too many animals are surrendered to the shelter for the most frivolous reasons. Animals feel sadness, pain and joy, just as humans do, but it’s up to us to be their voice and advocate on their behalf.”

Information on how to adopt Triton and other animals at the shelter will be available at the shows.

Another facet of the show is students from Columbiana Middle School will be involved in it, too.

Eleven CMS students, and one Elvin Hill Elementary School student, will join the 27 students from SCHS in the cast and crew.

The show is directed by Kathryn Andrews Myrick, with musical direction by Ashlyn Kuyrkendall.

“Thematically, we are hoping that our audiences leave with the idea that everyone deserves a second chance, and that adoption, whether it be of a human or animal, can be a beautiful, rewarding experience, benefitting both the adoptee and the adopter,” Myrick said. “We hope that our audiences feel compassion for both Annie and Sandy, and as a result, consider volunteering or fostering at an animal shelter, or possibly becoming a foster parent or adopting a child.”