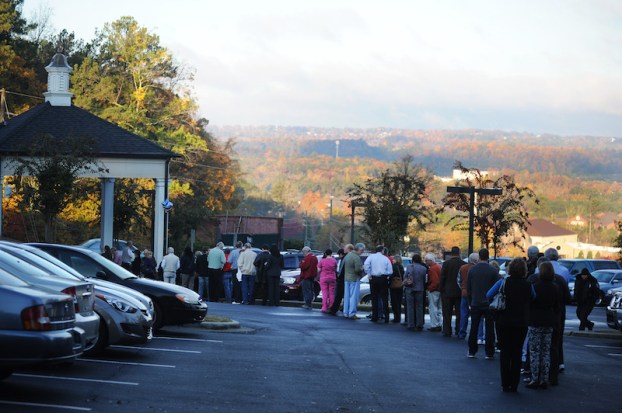 With all but provisional ballots counted, Shelby County had a voter turnout of 36.67 percent on Super Tuesday, March 3. (File)

With Super Tuesday came a busy day of voting for many residents across Shelby County, and at the end of the day, several candidates had won primary elections, while other races are headed to run-offs.

With 57,517 ballots cast, excluding provisional ballots, 40,531 filled out a Republican ballot, 16,832 filled out a democratic ballot, 154 filled out a nonpartisan ballot and three submitted blank ballots.

On the democratic ballot, presidential candidate Joe Biden took the presidential nominee in the state with 63 percent of the vote, which was part of a strong night featuring wins in Arkansas, Massachusetts, Minnesota, North Carolina, Oklahoma, Tennessee and Virginia.

While current President Donald J. Trump ran away with the Republican primary win in Alabama thanks to 690,381 votes (96.19 percent), the U.S. Senate race was a tight one that is now headed to a runoff between Jeff Sessions and Tommy Tuberville.

With a total of seven candidates, neither Tuberville nor Sessions could secure 50 percent of the vote with Tuberville gaining 233,408 votes (32.81 percent) and Sessions gaining 221,894 votes (31.19 percent). The two finished ahead of Bradley Byrne in third with 185,411 votes, while Roy Moore, Ruth Page Nelson, Arnold Mooney and Stanley Adair all finished with 7 percent or less of the vote.

In Shelby County, Tuberville received 15,698 votes, while Sessions received 12,272 votes. That runoff will take place on March 31 and the winner will advance to square off against incumbent Democrat Doug Jones for the senate seat in the general election, which will take place on Nov. 3.

In the race for Place 2 of the Court of Civil Appeals, Matt Fridy picked up an easy win over Phillip Bahakel. Fridy took 341,838 votes statewide, while Bahakel managed just 177,476 votes. In the county, Fridy snagged 24,700 votes compared to 10,210 in favor of Bahakel.

In the Court of Criminal Appeals, there will also be a runoff for Place 2 between Beth Kellum and Will Smith. Kellum received 230,323 votes (43.34 percent), while Smith received 196,957 votes (37.06 percent). With the race also featuring Jill Ganus, who had 19.6 percent of the vote, Kellum and Smith will head to a runoff after not getting the necessary 50 percent of the vote needed to secure a win.

Place 1 of the Court of Criminal Apeals, however, was settled with Mary Windom claiming 69.4 percent of the vote compared to Melvin Hasting’s 30.6 percent.

In the two local races, Morris beat Peters with a percentage of 66.70 of the vote, while Crowson narrowly got by Alan Miller behind 54.54 percent of the vote.

As a state, Alabama voters overwhelmingly said no to proposed statewide amendment one to change the State Board of Education with 826,703 saying no and just 272,121 saying yes. In Shelby County, 39,033 voted against it and 15,977 voted in favor.