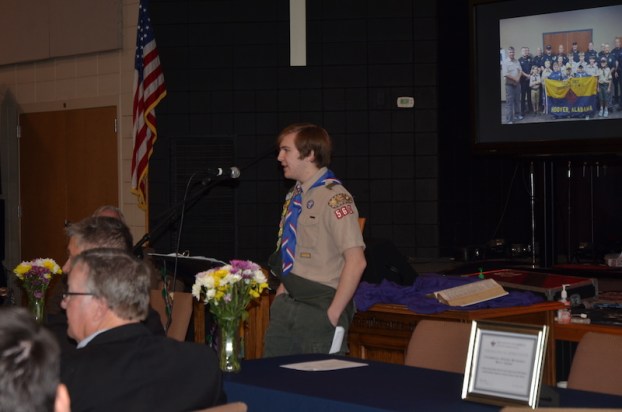 Scouts from Columbiana and Calera troops joined their parents, scoutmasters and local officials at Columbiana United Methodist Church for the program, which has been held annually for nearly seven years.

Seventeen-year-old Elijah Hockman, an Eagle Scout in Troop 560 in Columbiana, spoke about how scouting has impacted his life since he joined the troop six years ago. 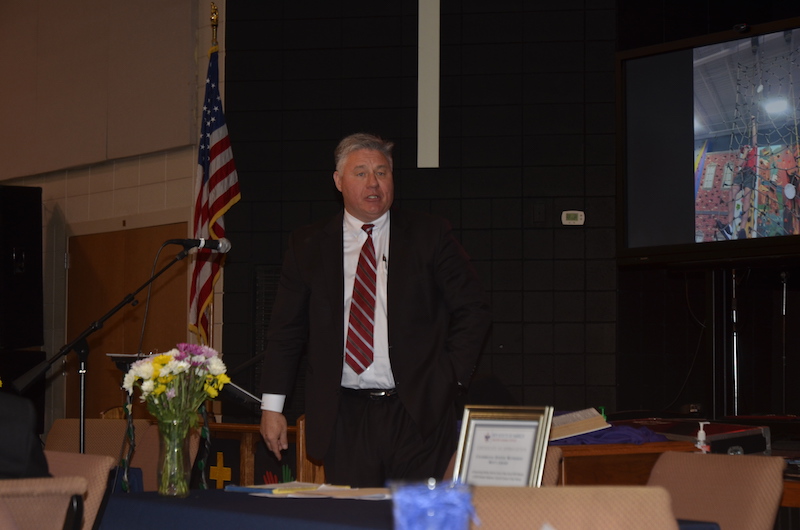 Shelby County Manager Alex Dudchock was honored with the Heart of an Eagle award at the breakfast. (Reporter Photo/Emily Sparacino)

“It has helped me develop a better sense of confidence in my own abilities,” Hockman said, and added he has formed many friendships with fellow scouts. “I have had some of my best formative experiences in scouts.”

Hockman became an Eagle Scout last January after completing his project to install benches at local trolley stops, and said he enjoys helping other Scouts with their Eagle Scout projects, too.

“I can tell you he is a dedicated scout,” Mayor Stancil Handley said of Hockman. “I’m very proud of Troop 560. They are the epitome of scouting.”

Shelby County Commissioner Kevin Morris introduced Dudchock, this year’s Heart of an Eagle recipient, with praise for his more than 30 years of service in the county.

“Anyone that knows Alex knows he does a lot of things for the right reasons,” Morris said. “He is responsible for an extremely diverse county – its management and daily operations. Alex has always kept his finger on the pulse of this county.”

Dudchock shared the qualities, many of which are emphasized in scouting, that set people apart.

“Character development and personal development equal community development,” he said. “It takes looking forward and working constantly at that. It takes all of us.”

As in all of his public speeches, Dudchock shifted the spotlight to his family and coworkers for their support and involvement in the initiatives that have formed during his tenure as county manager.

“It has been the most fulfilling time,” he said, but was quick to note he will not stop serving his community. “I’m not retiring; I’m going on to another chapter.”

The Boy Scouts of America Greater Alabama Council serves more than 27,000 youth in 465 units in 22 of the state’s counties.

Forty percent of the organization’s funding comes from Friends of Scouting financial support.

“Scouting is alive and thriving here in Shelby County,” Family Friends of Scouting Chair Larry Walck said. “We want to keep it going.”