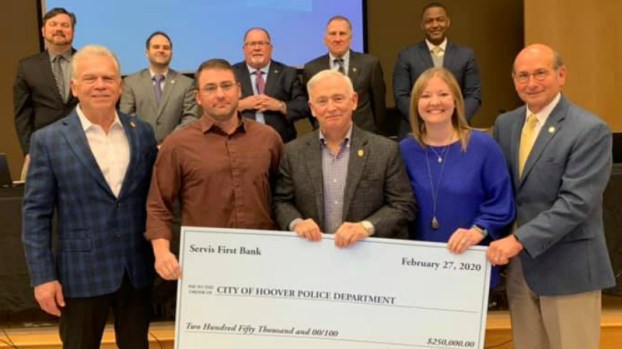 Frank Barefield, center, presented a $250,000 donation to Hoover for the construction of its new police training facility, which will bear the names of Barefield and his late wife upon its completion. (CONTRIBUTED)

HOOVER – When completed, the city of Hoover’s police training facility off Municipal Drive will be called the “Frank and Pam Barefield Hoover Police Training Center.”

Barefield, who Hoover Mayor Frank Brocato called “quite a friend to the city of Hoover and quite a friend to law enforcement in general” gifted $250,000 toward the training facility project.

The donation was presented during the Hoover City Council meeting on Monday, March 2, immediately after the Council approved resolutions for the naming of the facility.

“It’s just a pleasure for me to be able to be of just a little support to what I think is the best police department in the state if not the country,” said Barefield, who is chairman of the board of Crime Stoppers of Metro Alabama. “The citizens of Hoover are very lucky to have such a great, dedicated force, and this will ensure that they are the best trained.”

Hoover Police Chief Nick Derzis said Frank Barefield and his late wife Pam have been close friends for years, and the couple even developed the idea, and donated money, for HPD officers to wear pink badges in honor of breast cancer awareness—a gestures that has become an appreciated tradition in the city.

The 16,000-square-foot training facility, located adjacent to Hoover Fire Station No. 4 off Municipal Drive, will be the first dedicated police training facility in the city’s history, according to a resolution passed by the Council.

HPD officers formerly trained at the old Berry High School building until it was sold to the Vestavia Hills school system in 2016, Derzis said and called the construction of the new facility and Barefield’s donation an “exciting time for us.”

A payment commitment and naming agreement that was also approved by the Council contained stipulations for the donation and naming of the facility.

The naming of the Barefield Training Center will remain in place as long as the facility is used in whole or in part for training police officers, and the name would transition to a new facility if one was constructed in the future for this purpose.

FROM STAFF REPORTS  BIRMINGHAM – Ashley Waid was named as the new executive director of the Alabaster and Pelham YMCA... read more