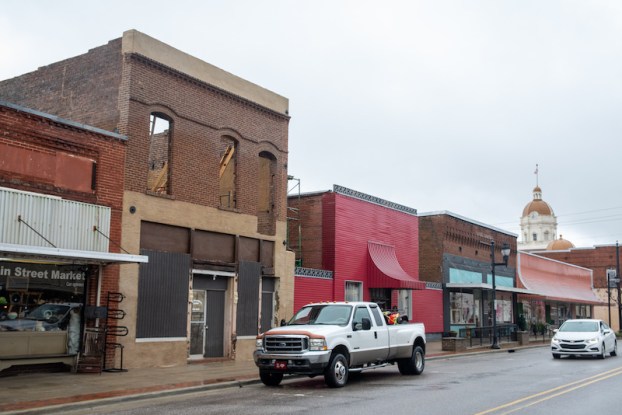 Since purchasing the property in February, Eagle Construction Products and Eagle Framing owner Rob McLeroy and his team have started what they are calling phase one of the restoration process: removing dangerous materials from the inside of the roughly 4,320-square-foot building, demolishing the damaged roof and floors, and stabilizing the building’s four sides, including the brick front façade on Main Street.

McLeroy said he and his partner, David Oakes, have formed a partnership called McOakes Properties LLC to take on the pool hall restoration project. McLeroy’s son, Mailon, is also helping with the project. 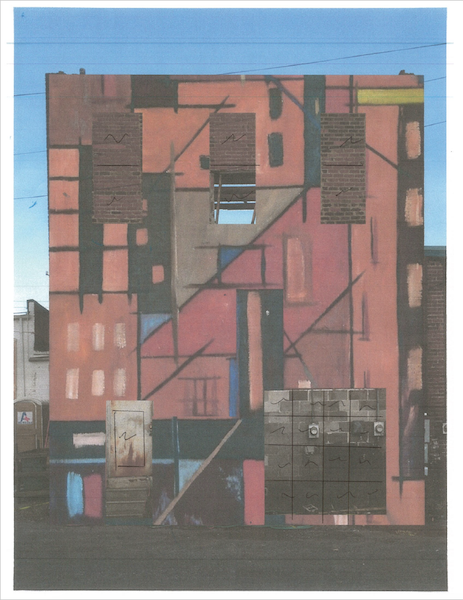 This is a rendering of the rear elevation of the former pool hall property as the restoration process continues. (Contributed)

Crews are about to start work on the interior parts of the original masonry to stabilize it, and form new footings to help protect the building’s original footings.

“We are in the process of letting our creative juices flow to come up with a unique floor plan we hope will attract a potential business, be it a restaurant or micro-brewery or event place,” Rob McLeroy said. “Our vision is to create a really cool, open space. We’re open to someone buying the property or having us build it out and lease it.”

The project comes after a long period of concern among city leaders and residents regarding the building’s rapidly deteriorating condition.

The Columbiana City Council in June 2019 approved the emergency remediation of the property, which had been declared a public nuisance by the city’s Public Safety Committee in the previous year.

In November, the council consented to moving forward with an $89,000 bid covering the abatement of the building, including the removal of any hazardous materials.

McLeroy said the building’s former owner, Sonny Conwill, approached him several months ago about possibly helping with the building’s abatement. McLeroy decided to purchase the building from Conwill.

According to McLeroy, the building contained mold, but no asbestos was found inside.

The architect for the project is Marshall Anderson with Design Initiative. Stewart Lee with Structural Design Group is the structural engineer.

McLeroy said his team aims to have phase one of the building’s restoration completed by May.

By NATHAN HOWELL | Special to the Reporter PELHAM – PrintsWell Inc., a Pelham based stationary and printing company, is... read more