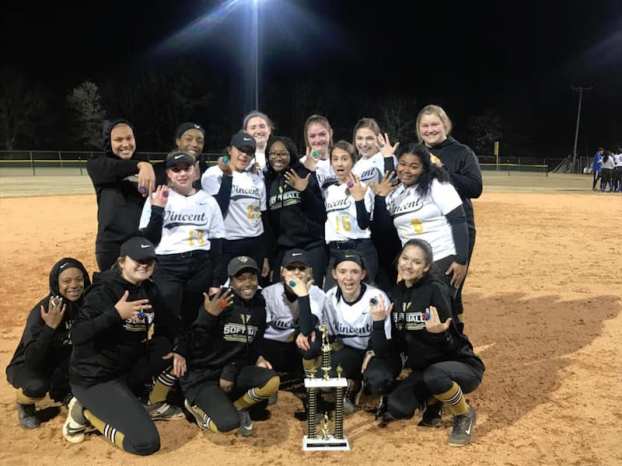 The Vincent Yellow Jackets claimed the 2020 B.B. Comer softball tournament on Saturday, March 7, thanks to a slim win over Childersburg. (Contributed)

SYLACAUGA – The Vincent Yellow Jackets entered Friday, March 6, with a 5-1 record thanks to an impressive showing in their first six games, but cemented their strength over the weekend by picking up four more wins to claim the 2020 B.B. Comer tournament.

The Jackets picked up a dominant 19-1 victory against Central-Clay to start the tournament, then edged out Childersburg 8-4 and tournament host B.B. Comer 6-5 in the semifinals to earn a rematch in the championship game against Childersburg.

Before making it to the championship, however, the Jackets found themselves in a thrilling game against the tournament host.

After taking a 5-0 lead through the first three innings of the game, Vincent seemed to be in good shape, but B.B. Comer ended up scoring five runs to stay alive in the bottom of the fourth inning to tie the game.

Following a scoreless fifth inning, Vincent got the top of the sixth started with a double from Takyla Smoot. After a ground out put an out on the board, McKenzie Fields hit a ground ball to third base that ended with an error and allowed Smoot to come home and score what became the game-winning run.

The championship game against Childersurg was somewhat similar, as Vincent jumped out to a 4-0 lead through the first 2.5 innings of play, but the Tigers answered back with four runs in the bottom of the third to quickly tie the game.

Vincent, however, put together a game-changing answer in the top of the fourth.

After a strikeout started the inning, the Jackets strung together a walk and two singles in a row. The second of those singles from Jaci Wallace broke the tie by driving home Fields.

An intentional walk then loaded the bases again, before Kayla Maxwell singled home two more runs for a 7-4 lead. A ground out and a wild pitch allowed the final two runs to score and put Vincent in front 9-4.

Molly Reynolds, Wallace and Maddy Walker all had two hits in the game, while Walker added two walks and an RBI. Maxwell finished 1-for-4 with two RBIs, while Lela Beck added a hit. Wallace, Walker, Maxwell, Katie Vazquez and Beck all had at least one RBI in the win.

Walker pitched all seven innings and allowed five earned runs, one unearned, and struck out seven.