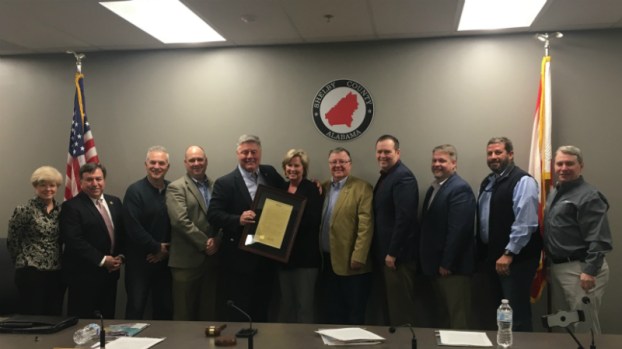 Alex Dudchock, fifth from left, was recognized by the Shelby County Commission on March 9. Dudchock is pictured with his wife, Natalie, and other county officials. (REPORTER PHOTO/STEPHEN DAWKINS)

COLUMBIANA – Alex Dudchock served as Shelby County manager for more than 25 years, and he and his accomplishments were recognized by the Shelby County Commission at its meeting on Monday, March 9.

The Commission approved a resolution “in recognition of extraordinary service and leadership.”

“This is a special day,” Dudchock said while standing next to his wife, Natalie. “I have not looked at it as a job; God has blessed me with a calling.

“The county’s future is still in front of it.”

The resolution noted that Dudchock:

The Commission also approved an incentive package for Therachem Research Medilab, a company in Chelsea that wishes to build a new facility in the city.

Chelsea and the state of Alabama have already approved incentives for the project, which is expected to create 20 new full-time jobs and represent an investment of about $5.2 million by Therachem.

Shelby County’s incentives will include a grant of up to 1 percent of net new payroll per year, not to exceed $14,000 and payable in five annual installments; and abatement of all noneducational state and county real and personal property taxes for a period of 10 years.

The Shelby County Economic and Industrial Development Authority and 58 INC. previously recommended the incentives for the Commission’s review.

“This is exactly the kind of business we want in Chelsea,” 58 INC. Managing Director Yvonne Murray told the Commission during her presentation about the incentives.

‘If it saves one life’: Aniah’s Law aims to change bail process

By MADDIE SMITH | Special to the Reporter News coverage on stories of young victims of violent crimes such as... read more