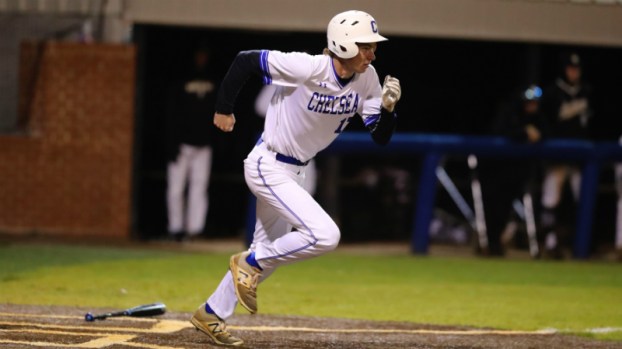 Chelsea is 9-3 this season after splitting two games against Benjamin Russell on March 7. (FILE)

CHELSEA – Chelsea’s baseball team split a doubleheader (3-2 win and 5-2 loss) against Benjamin Russell on Saturday, March 7, as its record moved to 9-3.

In the first game, a Carter Frederick run-scoring double with a 2-2 count in the bottom of the fourth inning was the difference, scoring a run to make it 3-2, and Chelsea’s pitching made the lead hold up.

The Hornets had fallen behind 1-0 in the first inning, took a 2-1 lead in the second and saw Benjamin Russell tie the game in the third.

Garrett Frye went 2-for-3 with a run scored and one run batted in for Chelsea, and Hunter Anderson was the only other batter with multiple hits, going 2-for-2 with one RBI.

Both Cole Kennedy and Logan Shores went 1-for-3 with a run scored. Austin Frye went 1-for-2 with a walk.

Connor Ball went the distance for the Hornets, allowing two runs on six hits in seven innings while striking out 12.

In the second game, CHS fell behind 2-0 in the top of the third inning and could never catch up, hindered by three errors in the field.

Jackson Webster went 2-for-3 with a double at the plate. The team’s runs were driven in by Jacob Boyle and Kennedy, and Anderson and JT McGregor scored the runs.

Frederick allowed three runs—one earned—on two hits and seven walks while striking out 10 on the mound.

Reid Gongwer allowed two runs on three hits in two innings while striking out three, and Anderson struck out two of the three batters he retired in the seventh inning.

The Hornets visit Briarwood Christian at 6 p.m. on Monday, March 9, and host Pell City at 6:30 p.m. on Thursday, March 12, before a doubleheader against Hillcrest-Tuscaloosa beginning at 4:30 p.m. on Friday, March 13.