‘If it saves one life’: Aniah’s Law aims to change bail process 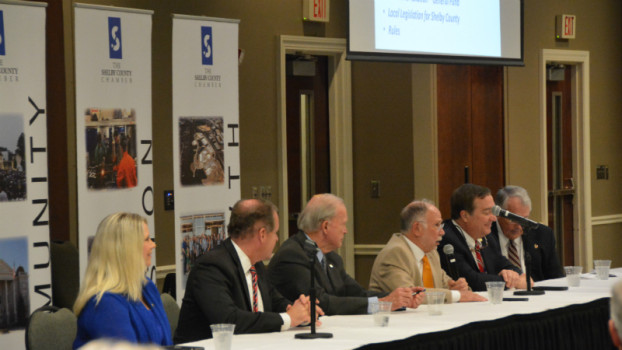 Lawmakers, including Cam Ward who introduced Aniah's Law, are hoping to push through a bill that would change the bail process for those that have criminal pasts. (File)

By MADDIE SMITH | Special to the Reporter

News coverage on stories of young victims of violent crimes such as Aniah Blanchard and Kamille “Cupcake” McKinney recently stunned Alabama residents. Now, the Alabama Legislature is considering a law and a constitutional amendment that would affect bail for individuals charged with violent crimes.

Bills denying bail for defendants of violent crimes were reviewed with a favorable report by the State Judiciary Committee public hearing on Wednesday, Feb. 26. SB59 and SB60 would work together on the issue of violent offenders and bail.

“Look at these cases: The Aniah Blanchard case and the Cupcake case,” said Sen. Cam Ward, R-Alabaster, who sponsored the bills and is the chair of the Judiciary Committee.

“Those perpetrators were out on bail —multiple bails. We want to make sure there will be an automatic denial of bail, but also, due process of law,” he said.

SB59 is the bill that signals a change to the constitutional amendment, which would “provide that all individuals shall be entitled to reasonable bail prior to conviction, except for offenses enumerated by the Legislature by general law.”

“This has to be set up to comply with the language of our Constitution,” said Sen. Sam Givhan, R-Gurley, of the State Judiciary Committee.

“This just opens a door to actually having SB60 approved,” Ward said.

SB60 is the bill that would actually change how you define bail. It would lay out a process that includes very specific issues that could be considered, such as a defendant’s criminal history and past convictions.

The bill states, “In all cases other than those specified, a defendant is, before conviction, entitled to bail as a matter of right.”

It goes on to mention the Class A offenses that are considered “violent crimes” and constitute the denial of bail. Those offenses are murder, kidnapping, rape, sodomy, sexual torture, sexual abuse and human trafficking.

“These crimes could happen any place — Helena, Pelham, Calera,” Ward said. “These victims were kidnapped, abducted, murdered by someone who should have never been let out.”

Opposition of the idea of bail reform stems from the concern of the eighth amendment, which states “Excessive bail shall not be required.”

He continued on this topic by stating that this bail denial would occur before a court hearing with all defendants innocent until proven guilty at their trial.

“If it only saves one person, then it’s worth passing,” Ward said.

If the bill passes in the Senate with a three-fifths vote, it will appear on the 2020 statewide election ballot in November.

This story was written by Troy University journalism student Maddie Smith as part of a Legislative reporting project.