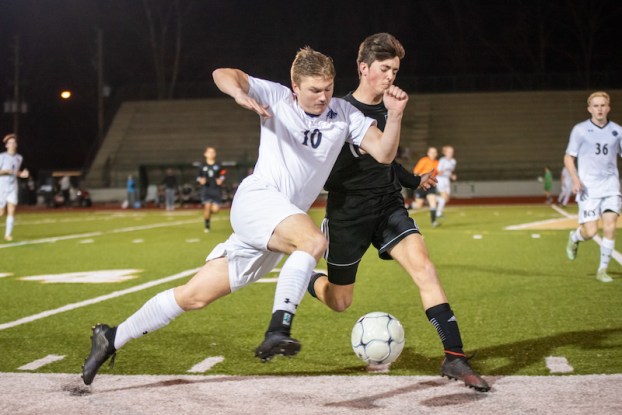 Briarwood traveled to Pelham on Tuesday, March 3, and came away with a win over the Class 6A No. 1 team thanks to two first half goals. (Reporter photo/Keith McCoy)

PELHAM – The Briarwood Lions’ boys soccer team has now won three of its last four games, and the most recent on Tuesday, March 3, may have been the biggest to this point in the season.

Having beaten top programs like Chelsea, Pinson Valley and Northridge already this season, but with losses to John Carroll and Fairhope, Briarwood was looking for a statement win against county foe and Class 6A No. 1 Pelham.

The Panthers entered the match 8-1-2 on the season with three wins in a row and no losses in their last eight games as part of an extremely difficult schedule.

With both having success at times early in the season, it set up a top-five battle between the 5A No. 4 team and the 6A No. 1 team.

But Briarwood’s defense put together one of its strongest performances of the season. Coming into the matchup, the Lions had posted four shutouts in their nine games, while the defense had given up more than one goal just three times this season and no more than three.

That side of the ball made its presence known again in the matchup with Pelham. For 74 minutes of the game, the Lions didn’t flinch.

The Panthers, who came into the game having scored 30 goals in 11 games, struggled to find room to breathe against a tough Briarwood back line.

Briarwood on the other hand found some offensive success thanks in large part to Trent Malloy, who contributed in multiple facets.

His first game-changing play came on a nice pass to teammate Mathias Leib, who took advantage and buried home the first goal of the game to put Briarwood on top 1-0 in the first half.

Then, shortly after, Malloy got in on the scoring himself and put Briarwood’s second goal into the back of the net, which allowed the Lions to take a 2-0 lead into the break.

Those two goals helped an already tough defense feel even more confident and allowed them to protect the lead.

For the majority of the second half, Briarwood held up to the test of Pelham’s relentless attack to try and pull off a comeback. But with around six minutes left, the Panthers finally broke their scoreless streak in the game to make the score 2-1 late in the matchup.

Pelham continued to fight, now looking for an equalizer, but the Lions stepped up and held off the final attacks from Pelham to pick up the 2-1 victory.

By ALEC ETHEREDGE | Managing Editor PELHAM – It was a big night on several fronts for the Chelsea girls... read more