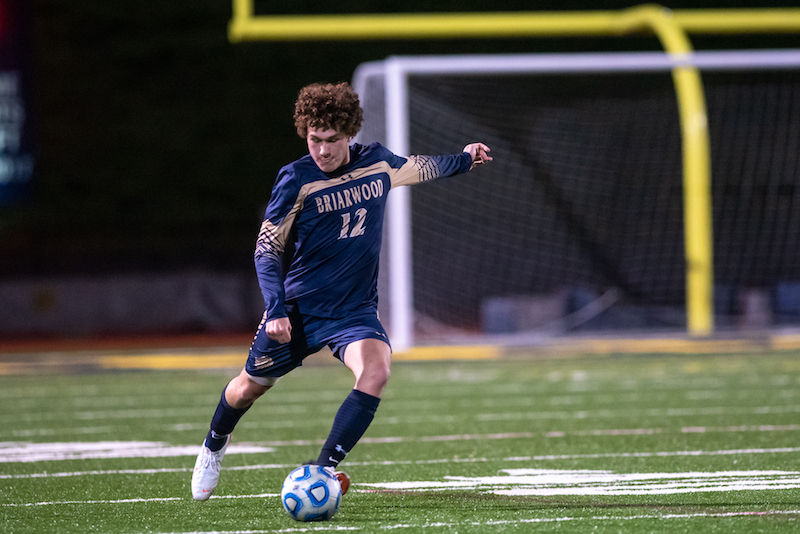 Briarwood’s soccer team improved to 2-1 in area play with a victory against Montevallo on Monday, March 9, which continued a four-match winning streak. (Reporter photo/Keith McCoy)

Following last year’s Class 4A-5A soccer state championship behind the strength of Logan Frost, Briarwood has been searching for a new identity early in the 2020 soccer season, and over the last week, it looks as if the Lions are starting to find it.

Facing some injuries and setbacks through the first month of the season, Briarwood has all of a sudden hit a grove against some extremely stiff competition picking up wins against Class 6A No. 1 Pelham and No. 6 Chelsea, as well as a win against Class 4A-5A No. 1 Indian Springs.

That sparked a three-game win streak, while the win against Indian Springs marked the Lions’ first area win of the season and handed Springs its first loss of the season.

It came as part of a strong week defeating three top 10 teams after losing to area foe John Carroll in their area opener.

But on Monday, March 9, the Lions continued their win streak to four games and did so against another area opponent by taking down Montevallo 4-0 on the road.

With that victory, Briarwood improved to 2-1 in area play with that lone loss coming to the Cavaliers in a 1-0 game and a second matchup looming on March 17.

Against the Bulldogs, Briarwood was struggling offensively early on, but the Lions finally found something in the final two minutes of the first half.

It started with a goal from Trent Malloy to give them a 1-0 lead, while Malloy then helped on another goal by assisting on a goal from Jeffrey Neville shortly after. That allowed Briarwood to take a 2-0 advantage into the break.

That seemed to spark the Lions heading into the half, as they came out on a mission scoring two more goals in the first two minutes of the half.

It started with a goal from Daniel Scharf, while Braxton Tubbs followed. Both goals came off assists from Josiah Brower, as Briarwood jumped in front and let its defense take over from there to create the final score of 4-0.

Montevallo improves to 8-1 after dominant win against Isabella