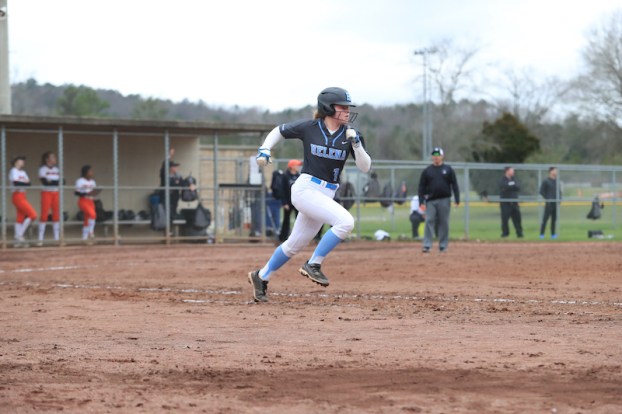 Helena picked up a dominant 15-0 area win over Calera on Tuesday, March 10. (For the Reporter/Dawn Harrison)

HELENA – The Helena Huskies put together a dominant effort in their area opener against Calera on Tuesday, March 10, behind the tune of a 15-0 shutout victory in a shortened four-inning game.

The Huskies scored at least two runs in the first four innings to claim the mercy-rule victory and outhit the Eagles 11-1, while committing no errors in the matchup.

The scoring started early and continued throughout for the Huskies after Torie White tripled home two runs in the bottom of the first. That came after a walk and error put the first two batters of the inning on base.

Following a line out, Peyton Wilkins doubled to the left side and drove home White to put the Huskies in front 3-0, which held up at the end of the opening inning.

After a 1-2-3 inning defensively, Helena got back to work in the bottom of the second thanks to back-to-back doubles from Bella Holiday and Alana Scott. Scott’s double drove home Holiday to make it 4-0. Two batters later, Scott came home after stealing both third and then home to put the Huskies on top 5-0 through two innings.

Following another 1-2-3 inning in the top of the third, Wilkins led the bottom half off by being hit by a pitch. Two batters later, Emily Crowe drove a ball deep and over the left-field wall for a two-run shot that put the Huskies in front 7-0.

Bullock then singled and Wilkins doubled to put two runners quickly back in scoring position, before another steal of home and a sac fly made it 9-0 Huskies.

Helena scored one more run in the inning when White tripled to right field, driving in Scott, who was hit by a pitch the at bat before.

Already up by 10 runs, the Huskies stepped back to the plate in the bottom of the fourth looking to end the game by scoring five more runs.

Helena quickly loaded the bases following a single and two straight walks. Then, Bullock singled to drive in one run and Wilkins doubled to drive home two more.

That made it 13-0 before a sac fly drove home one more to make it 14-0. The next two batters in the order walked to load the bases, and following a fielder’s choice to prevent a run, Kierra Schulz drew the game-winning walk with the bases loaded to end the 15-0 game.

At the plate, White, Crowe and Wilkins each had two RBIs, while White and Wilkins also picked up two hits. Scott and Bullock each added two hits and one RBI apiece, while Holiday, Wilkins, Schulz and Crowe all had one hit in the win.

By ALEC ETHEREDGE | Managing Editor  HELENA –  The Calera and Helena soccer teams got together on Tuesday, March 3,... read more