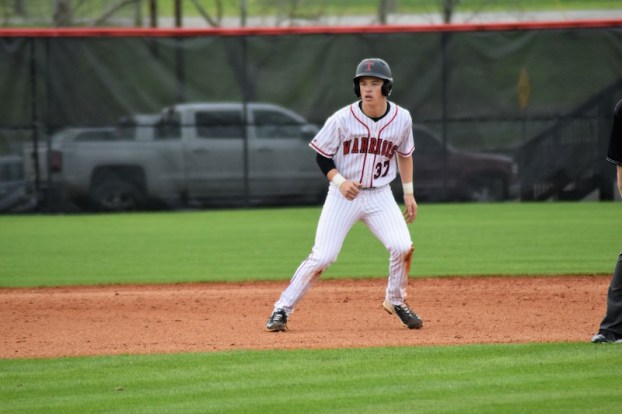 Thompson’s Carson Hobbs threw a complete game on the mound and helped his cause at the plate to lead Thompson to a win over Calera. (For the Reporter/Brooke Parker)

ALABASTER – The Thompson Warriors had the best player on both sides of the plate—and it just so happened to be the same person. Carson Hobbs pitched a two-hit complete game shutout over seven innings and put the game away at the plate with a two-run home run in Thompson’s 4-0 win over county foe Calera on Tuesday, March 10.

Logan Braunschweig got things going for Thompson in the first inning with a heads up play to run through second base on a passed ball to get to third.

He was singled home by the next batter, Saxon Klinner, who wouldn’t get further than second before the Warriors’ threat was quelled. Josh Mehmen was the next to strike for the Warriors as he doubled on a line drive to left field with one out.

Next up, Connor Gregory sent a long fly ball deep to right field that was caught but gave Mehmen the time to tag up and beat the throw home for the 2-0 lead.

Hobbs laid down the first 13 batters he faced in the game and made sure the Eagles weren’t capable of a comeback. Cade Watts tripled with one out in the bottom of the third inning and Hobbs came behind him with a smash to left field for a home run that gave Thompson a comfortable 4-0 lead that was preserved the rest of the way.

Hobbs was on fire throwing for strikes over 70% of the time, while racking up nine strikeouts to just two walks and allowing no more than two base runners in any inning.

Six players got hits for Thompson, including Klinner and Mehmen, who also finished with an RBI and a run, respectively.

Graham Blankenship and Kobe Prenitce had Calera’s two hits while Blankenship took the loss on the mound giving up four hits, three earned runs, two walks and a strikeout.

Thompson (10-5) needed the win after four straight losses in the Perfect Game Showdown over the weekend. They will host Helena up next Thursday, March 12 starting at 6 p.m. Calera (6-3) will host Montevallo on March 12 beginning at 7 p.m. and travel to McAdory this weekend.

By ALEC ETHEREDGE | Managing Editor TUSCALOOSA – The Thompson boys soccer team is in the midst of one of its... read more