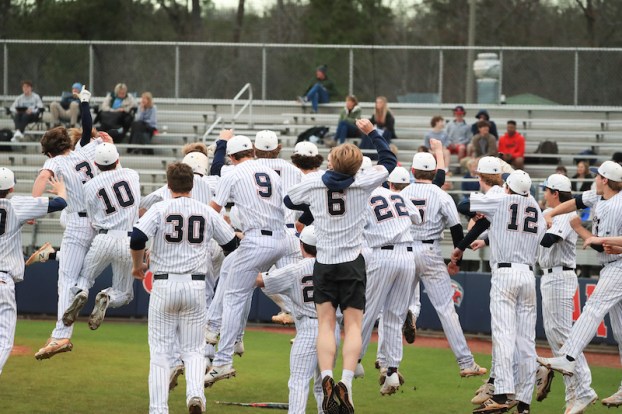 NORTH SHELBY – The Oak Mountain Eagles got a big walk-off win on Tuesday, March 10, as they emerged from a back-and-forth contest with the Briarwood Christian Lions with an 8-7 victory.

The Eagles only managed four hits but took advantage of four errors from the Lions to snag the win at home.

Oak Mountain (8-4 ) took an early lead in the bottom of the first inning, as Briarwood put four straight on base with a walk and two hit batters. Davis Gillespie’s single was the lone hit in the inning, but the Eagles grabbed two runs behind a walk and Stephen Moraski’s sacrifice fly that brought home Mitchell Pierce and Gillespie.

Briarwood (7-4) evened things up in the next inning without a single hit as Oak Mountain walked the bases full with two outs. Connor Adams couldn’t handle a hard hit grounder that squirted loose and allowed two Lions to cross home plate to tie the game at 2-2.

The Eagles answered back quickly in the third inning, as a walk and a mishandled bunt from Parker Campbell put runners on the corners for Oak Mountain.

Jake Rivers grounded out next, but it was enough to get Connor Adams home to retake the lead at 3-2. The Lions responded again in the third as Wesley Helms led off with a single and was sent home by Blake McKenna’s double to tie the game at 3-3.

The Lions had a chance to add to the lead with one out and two runners in scoring position, but struck out with their final two at bats. Oak Mountain loaded the bases and retook the lead again, as Cole Sester scored from third on a double play that ended the Eagles’ threat with a 4-3 lead.

The pendulum swung back again in the top of the fourth as Briarwood’s Cal Higdon singled and advanced on Eli Steadman’s sacrifice bunt. Helms’ second straight single scored Higdon to tie the game up for the third time at 4-4.

The Oak Mountain offense went silent for the next two innings, giving the Lions time to build their first lead in the sixth inning. After two fly outs, Briarwood loaded the bases with two walks and Helms double, which brought home Tyler Waugh.

Waugh had only drawn a walk to that point but cleared the bases with a triple to right field to put the road team up 7-4.

However, protecting their first lead, the Briarwood defense struggled in the bottom of the sixth. After getting the first out, the Lions gave up three straight errors—the last of which scored Stone Evers.

A passed ball on the next at bat scored Connor Adams, while a Rivers ground out brought Parker Campbell home to tie the game at 7-7.

Pitcher Colton Smith came in and provided good relief in the top of the seventh inning laying down the first two batters he faced, then popping up the last after giving up two singles.

Three more chances awaited the Eagles in the final frame, but they only needed one of them. After Cole Sester drew an opening walk, he was driven home two batters later by Moraski, who doubled to center field for the walk-off win.

By SETH HAGAN | Special to the Reporter ALABASTER – The Thompson Warriors had the best player on both sides... read more