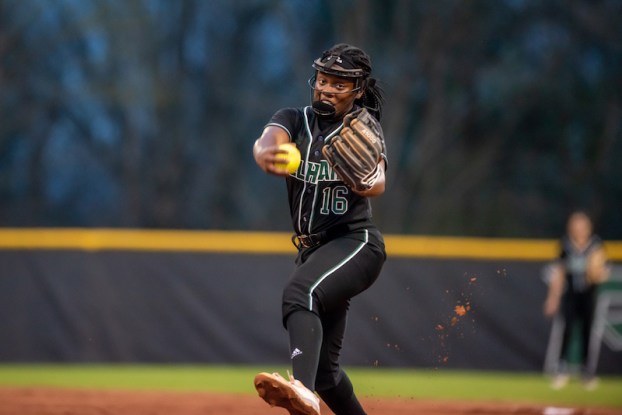 The Pelham softball team used a strong outing from Brianna Copeland to grab a 3-2 victory against McAdory on Tuesday, March 10. (Reporter photo/Keith McCoy)

PELHAM – The Pelham offense hit a rhythm on Tuesday, March 10, as the Panthers were able to outhit McAdory 9-2 en route to a slim 3-2 victory behind a strong performance from Brianna Copeland.

Copeland was not only stellar at the plate, but also put together an impressive showing in the circle to help her team come through with a big win.

At the plate, she drove in all three of the Panthers’ runs with a 2-for-3 performance that saw both of her hits leave the yard for home runs. She was also determined to let that be the difference in the game by having command pitching. She went on to allow just two hits and two unearned runs to the Yellow Jackets, while striking out 12 batters.

Copeland’s strong night started in the bottom of the first inning when she drove a solo homer over the center-field wall that put the Panthers in front 1-0 quickly.

The next two innings came and went quietly with a combined two baserunners reaching safely, one for each team, but in the top of the fourth, McAdory was ready to strike.

Following a groundout, the Yellow Jackets were able to take advantage of an error at first base when the next batter doubled to left field to drive home a run and tie the game at 1-1.

The Panthers looked like they were going to have an immediate answer when they loaded the bases with one out in the bottom of the fourth, but the runners were left stranded, which became a theme throughout as Pelham left a total of seven runners on base.

But following a quick 1-2-3 inning defensively in the top of the fifth, Copeland was due up in the home half, and she again made McAdory pay.

This time, it wasn’t a solo shot, as she followed a Lauren Watts single by driving her second home run to dead away center field to put the Panthers in front 3-1 through five innings.

From there, it was up to Copeland in the circle to finish off the game. In the top of the sixth, she had two strikeouts, but allowed a walk. That walk ended up leading to a run after the baserunner stole second and then came around to score on an error.

But that was all the damage in the inning, as McAdory still trailed 3-2.

Pelham again threatened with two singles to kick off the bottom of the sixth, but couldn’t bring either home.

Copeland, however, was still in a zone pitching despite the runs he gave up an inning before. In the top of the seventh, she struck out the first two batters and forced a fly out to record the third out and the 3-2 win.

In addition to Copeland, Abbi Lombard went 2-for-3, while Watts, Hallie Burnett, Jaley Davis, Katie Weldon and Alexis Williams each had one hit in the victory.