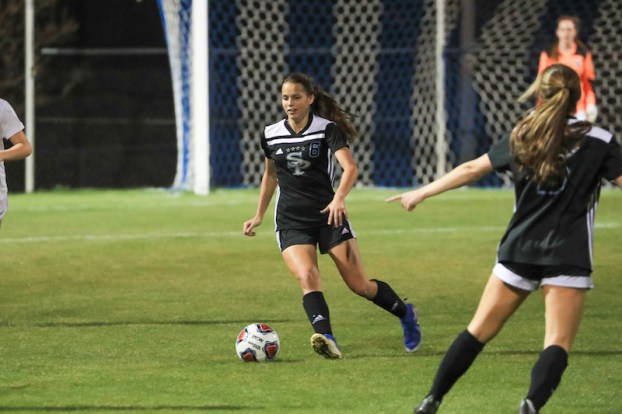 Spain Park’s soccer teams both picked up area wins on Tuesday, March 10, against difficult area opponents. (For the Reporter/Dawn Harrison)

HOOVER – The Spain Park boys and girls soccer teams both picked up crucial area wins on Tuesday, March 10, to continue to chase down a 2020 playoff spot.

For the boys it was a 7-1 victory against area foe Hewitt-Trussville, while the girls edged out area opponent Mountain Brook 2-1 in a battle of top seven teams.

It was a big win for the Spain Park girls, who were coming off a loss to No. 1 Vestavia Hills in an area matchup the game before by a final of 2-0.

In an area that features all four teams ranked inside the top 10 of the Class 7A standings, it was a crucial win for the No. 10 Jaguars against the No. 7 Spartans with only the top two teams at the end of area play advancing to the postseason.

The Jaguars are now 1-1 in area play with a loss to Vestavia and a win over Mountain Brook. They’ll still have two matchups against No. 4 Hewitt-Trussville and one each left against Vestavia and Mountain Brook to determine their postseason fate.

Spain Park’s boys also picked up a big win by taking down Hewitt-Trussville 7-1 to improve to 2-0 in area play with a 1-0 victory against No. 3 Vestavia Hills in its previous game.

With the victory, the No. 5 Jaguars are not only unbeaten in a difficult area, but are now 8-1-1 on the season with that lone loss coming to No. 4 Thompson.

Against the Huskies, Spain Park jumped out to a strong start in the first half and scored six goals in the opening period.

Conner Warren, Allen Melendez, Jacob Kowers, Kaleb Jowers (2) and Allen Fernandel all scored in the first half to help the Jags take the dominant lead into the half. While the second half saw an even 1-1 game, Brian Alba added another goal for the Jaguars, while the defense held its own to help pick up the 7-1 victory.

Spain Park has now won four games in a row and has scored 35 goals this season. The Jags currently sit atop the area standings.

By ALEC ETHEREDGE | Managing Editor TUSCALOOSA – The Thompson boys soccer team is in the midst of one of its... read more