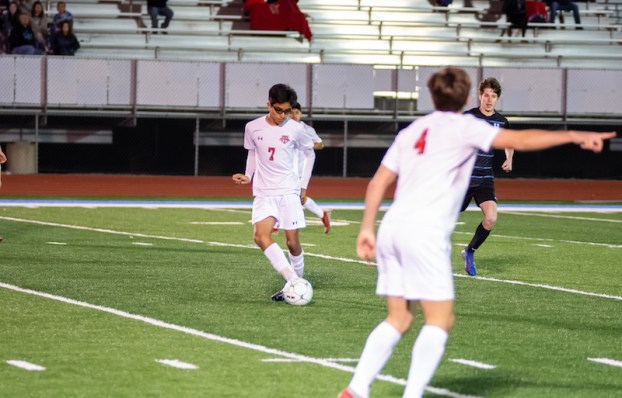 Thompson’s soccer team picked up a 6-0 area win against Tuscaloosa County on Tuesday, March 10, to improve to 1-1 in area play. (For the Reporter/Larry Dancy)

TUSCALOOSA – The Thompson boys soccer team is in the midst of one of its best seasons in recent history after picking up a win against Tuscaloosa County on Tuesday, March 10.

With that win, the Warriors improved to 12-1-1 on the season and 1-1 in area play to continue a strong season that currently has them ranked as the fourth best soccer team in the Class 7A coaches poll down at Eurosportscoreboard.com.

The win over the Wildcats on Tuesday was big for several reasons, the main being that it marked a bounce back victory from the game before, while also marking the Warriors’ first area win of the season.

In the prior game, Thompson took on area foe Hoover and fell by a final of 1-0, but it was an impressive showing that proved the Warriors can compete for both an area title and a deep playoff run, as the Buccaneers are currently the state’s No. 1 ranked team in Class 7A.

With that tight loss, the Warriors still seemed to gain confidence and it showed in the 6-0 shutout victory against the Wildcats—a team Thompson beat just 2-1 at home 10 days earlier.

Through the first month of the season, Thompson has played a difficult schedule beating teams like Foley, St. Paul’s, Bayside Academy, Spain Park, Hillcrest-Tuscaloosa and many others.

But competing in a difficult area, the Warriors have to compete against top 10 teams in Hoover and Oak Mountain, while Tuscaloosa County’s only two losses are to Thompson.

While there are still two games left against Oak Mountain and one each against Hoover and Tuscaloosa County, the Warriors have already beaten and competed against top teams, which should make the last month-and-a-half of the season fun to watch as they chase a playoff spot.

Through their first 14 games, the Warriors have given up just six goals for an average of 0.42 goals per game. They’ve also posted nine shutouts and have yet to give up more than two goals in a game.

Offensively, Thompson has scored 50 goals for an average of 3.57 goals per game. The Warriors have only been shutout once, in the game against Hoover, and have scored more than one goal in 10 of their 14 games.

By SETH HAGAN | Special to the Reporter ALABASTER – The Thompson Warriors’ bats came alive in their final at... read more