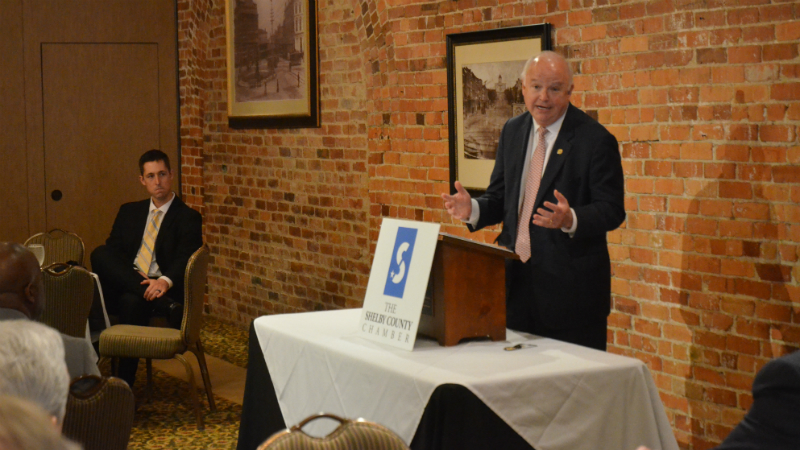 MONTGOMERY – Shelby County business leaders heard from state officials about workforce development and other topics of local importance during the annual Montgomery Drive-In on Wednesday, March 11.

Transportation was provided for attendees from The Shelby County Chamber office in Pelham to Central Restaurant, where they enjoyed lunch while hearing from Jo Bonner, Gov. Kay Ivey’s chief of staff.

Bonner reminded the guests of the state’s “rotten shape” when Ivey took over as governor and stressed her commitment to solving problems while in office regardless of the popularity of the solutions.

“The easy thing to do would have been to pass the baton to somebody else,” Bonner said. “There’s a whole list of challenges we have faced in this state.”

Ivey’s initiatives have included an infrastructure bill eventually known as Rebuild Alabama, rehabilitation of the state’s prisons and the recent Amendment 1, which would have dismantled the State Board of Education and moved the department under the governor’s control.

“The fact that the amendment failed doesn’t change the fact that we have a problem with our education system,” Bonner said.

Ivey has also worked toward three new mental health centers in the state and put together a task force to study the gambling issue.

“If we’re honest with ourselves, mental health affects everyone,” Bonner said.

Sen. Cam Ward pointed out at the lunch that the recidivism rate for Alabama’s prisons is 31 percent, but that number drops to 7 percent if the former prisoners secure a job, making workforce development important to the state’s criminal justice reform effort.

“It might suggest that the size of government needs to be cut,” Rep. Arnold Mooney said about the restrictions.

Common themes among the speakers included economic and workforce development.

“I can tell you that the workforce starts in the earliest years,” Ross said about the importance of early childhood education, including Alabama’s nationally-recognized First Class Pre-K program.

Officials wish to continue expanding the program until 70 percent of children can participate, Ross said and added that parent and community support of schools is critical.

“You can only take a school system to the level of community expectations,” she said.

Pelham Barks and Recreation Dog Park: A place for…